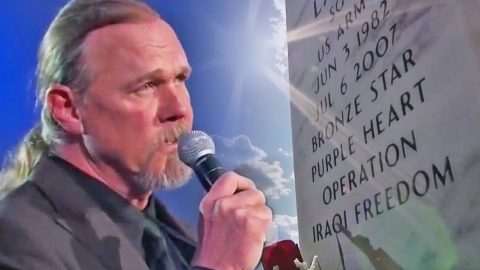 Trace Adkins has performed his hit song “Arlington” dozens of times. But whenever he steps up on stage to sing the emotional song, he gives every word his all.

Released in 2005, “Arlington” was the second single off of Adkins’ album Songs About Me. The song quickly won over the hearts of country fans, and climbed all the way to the second spot on the Billboard Bubbling Under Hot 100 chart.

It has been a staple of many of Adkins’ performances ever since.

Those who have been longtime fans of Adkins’ know that “Arlington” isn’t his only song dedicated to the military. Just a couple of the other titles he’s recorded honoring servicemen and women include “Til the Last Shot’s Fired” and “Still a Soldier.”

The latter song is one of his most recent releases, and features a veteran as the star of its music video.

But as impactful as Adkins’ patriotic music video are, nothing beats the power of his live performances.

One performance of “Arlington” stands out above all the others because of how compelling it was. Performing during PBS’s Memorial Day special in Washington D.C. in 2016, Adkins was right next to the song’s namesake location.

" I can rest in peace, I'm one of the chosen ones. I made it to Arlington." – @TraceAdkins #MemDayPBS pic.twitter.com/TNDwMU8q6q

We’re sure that fact was weighing heavy on his mind as he sang, honoring all those who found their final resting place in that sacred ground.

Taking off his hat as a show of respect, Adkins’ eyes welled with tears as he sang about our fallen heroes and the sacrifice they made. Adkins always pours his heart into “Arlington,” but something about this performance was different.

It’s as if he understood the weight of the occasion, and that ended up giving him the push to put forth what we consider to be one of the best performances of his career. See his riveting Memorial Day performance of “Arlington” in the video below.