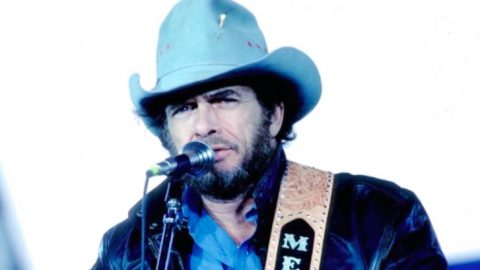 Although Merle Haggard never served in the military himself, he always had a great admiration for our troops. Haggard sang many patriotic songs over the years, but one of the most touching is his 1970 single “Soldier’s Last Letter.”

“Soldier’s Last Letter” was originally written by Redd Stewart and Ernest Tubb, which Tubb released as a single in 1944. Stewart was inspired to write the song based on his own military experience in the South Pacific following the attack on Pearl Harbor.

It resonated strongly with audiences and ended up claiming the top spot on the charts.

How The Song Came To “The Hag”

Decades later, Haggard decided to perform his rendition of the song on his album Hag. The song was also a major hit for Haggard, and it peaked at the third spot on the U.S. Billboard Hot Country Singles chart. Its popularity probably had something to do with the fact that Haggard released it during the Vietnam War, making it relevant to the time.

In addition to being a country hit, Haggard also crossed over to the pop charts with the song, which proved how much of an impact it had on those who listened to it.

#NationalSupremeSacrificeDay
"Soldier's Last Letter"
by Merle Haggardhttps://t.co/jOGHwpAB4U
Thank you to our veterans for your sacrifices & our freedom.@MerleHaggard #MerleHaggard
Enjoy & RT

The song’s lyrics tell the emotional story of a soldier who writes his last letter to his mother before he is killed in battle. Knowing that her son is gone, the mother prays that all of the other soldiers are kept safe:

“Then the mother knelt down by her bedside,
And she prayed Lord above hear my plea.
And protect all the sons who are fighting tonight.
And dear God, keep America free.”

When you listen to Haggard sing “Soldier’s Last Letter” in the clip below, it will be clear to you why it touched so many people. The combination of the powerful words and Haggard’s emotional delivery makes for a stunning tribute to those who gave the ultimate sacrifice.

Our prayers go out to all of our servicemen and women who are currently serving our country, and to the loved ones of those who never came home.