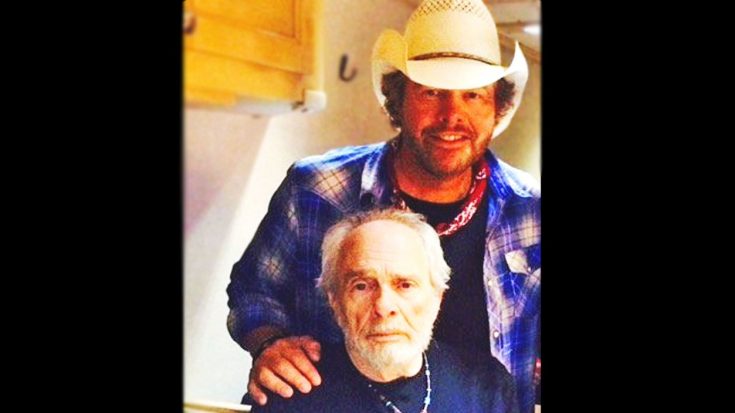 After Merle Haggard was diagnosed with double pneumonia in December 2015, he was forced to cancel the shows he had scheduled for the rest of the month. He hit the road again once he started feeling better, but occasionally canceled more shows to take time to recover.

In February 2016, Haggard’s publicist said he wouldn’t perform any shows that month. Despite that, he was determined to go through with his February 6th show at the Mandalay Bay Ballroom in Las Vegas. He did just that.

Although Haggard appeared frail and out of breath, no one ever expected that February 6th concert would be one of his final shows.

A Story Of Friendship

Following Haggard’s passing on April 6, 2016, stories started flooding in about the last few months of his life. One particularly touching story came from actor W. Earl Brown, who was at Haggard’s Vegas show and witnessed something amazing in the process.

It turns out another major country star was in attendance at the concert that day…Haggard’s longtime friend Toby Keith.

In a post Brown shared on Facebook, he said that Keith stepped up and stood by Haggard’s side to help him through his Vegas show when he was running out of steam.

In an interview with a local Oklahoma news station after Haggard passed, Keith opened up about helping his friend when he needed him most:

“He looked really frail, and I walked him on the stage and said ‘I’ll be over here. You call me up whenever you need me.’ He made it about eight songs, and he called me up and said, ‘Let’s do something.'”

Once Keith learned about Haggard’s death, he took to Twitter to share a heartfelt message in his honor, writing, “The greatest singer songwriter of my lifetime is gone. Thanks for the music and friendship. R.I.P. Hag.”

The greatest singer songwriter of my lifetime is gone. Thanks for the music and friendship. R.I.P. Hag – T pic.twitter.com/Dncf3mmSdF

Tune in below to see a video of Keith and Haggard performing “Okie From Muskogee” during the Vegas show.

Hats off to Keith for being such a good friend to “The Hag.”