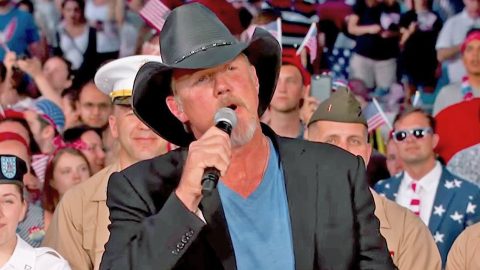 Trace Adkins is one of the U.S. military’s biggest supporters. On top of going on numerous USO tours to entertain the troops, Adkins has released several songs in honor of servicemen and women

Some of these songs include “Arlington,” “‘Til the Last Shot’s Fired,” and “Still a Soldier.”

Now, there’s another song in Adkins’ repertoire that pays tribute to those who have served in the military. This new song, titled “Empty Chair,” was released in the lead-up to Memorial Day 2021:

“This year Trace wanted to create a special tribute to the men & women in uniform who have lost their lives in the line of duty,” a statement on Adkins’ official social media pages read. “‘Empty Chair’ is a song dedicated to those who never returned home. It is for everyone who has loved & lost a hero.”

The song is an emotional one. It has Adkins singing about a group of veterans who sit at a local McDonalds and laugh over cups of coffee. But even though these men came home from their service and went on to live long, happy lives, Adkins sings of how they always remember those who weren’t so lucky.

“You can almost smell the gun smoke in the foxhole that they shared,” the song goes. “On the days they raise their coffees, and toast the empty chair…“

Adkins also released a music video to accompany the song. On social media, he wrote that the video, “honors friends and family of fans that were shared in tribute. Their sacrifice will never be forgotten.”

The video contains photos of Adkins’ fans’ loved ones who served in the military. It drives the message home to see those pictures while hearing Adkins sing about the things veterans have been through…and the people they have lost.

Watch Adkins’ video for “Empty Chair” below. It would be wise to keep a few tissues close by, because this song is sure to make you shed a tear or two.