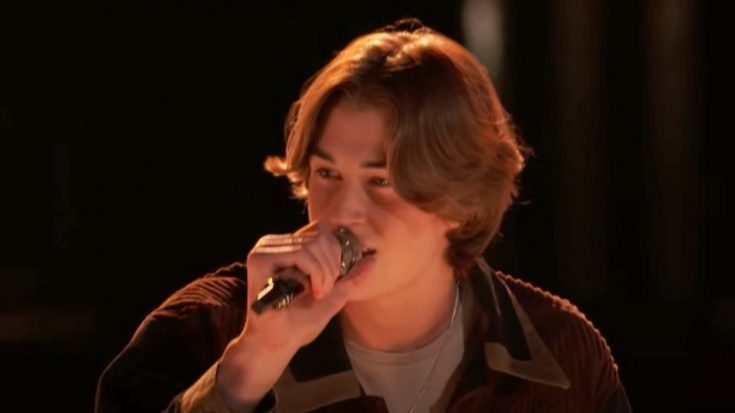 Brayden Lape keeps delivering impressive performances on The Voice. The 16-year-old member of Team Blake advanced through the battles and knockouts to become a member of the Top 16. Then, he competed in his first live show. During that show, he performed a cover of Brett Young‘s “Mercy” that brought Gwen Stefani to tears.

Lape’s performance of “Mercy” resonated with viewers at home too. They voted to send him through to the next stage of the competition as a member of the Top 13.

His followup performance was another one for the books. This time, Lape opted to sing Kenny Chesney‘s #1 hit from 2012, “Come Over.” The song was actually co-written by Sam Hunt, along with Shane McAnally and Josh Osborne. Hunt recorded and released his own version of “Come Over” in 2013.

Depending on when his birthday is, Lape was only five or six years old when Chesney released “Come Over” in May 2012. So it truly is a song he grew up on.

Lape poured his heart into his cover of “Come Over,” and the coaches took note. He earned a lot of praise from Stefani, who said:

“There’s just something about you You don’t really have to do much, and that’s rare. I want you to remember that about yourself, because you’re sixteen and you’re only gonna get to know yourself better.”

Shelton was just as complimentary. He called Lape “naturally gifted,” and said:

“You just have that thing, [Stefani’s] right. You have a solid country voice that’s different, that’s unique, and you have a future in country music. Not to mention your future on this show.”

That’s some high praise for Lape to receive from his coach!

It seems the viewers agree with what Stefani and Shelton had to say. Comments on the official YouTube video of Lape’s performance include messages such as:

“He is a very clever singer. The subtle moments and having the emotive higher parts all of it was really well done.”

“He has such a calming voice it’s just amazing!!! I really want him to win!!”

“Love that song, love his rendition, perfect song choice for him!”

Head below to watch Lape deliver his cover of “Come Over.” We agree with Shelton…Lape seems to have a bright future ahead of him!