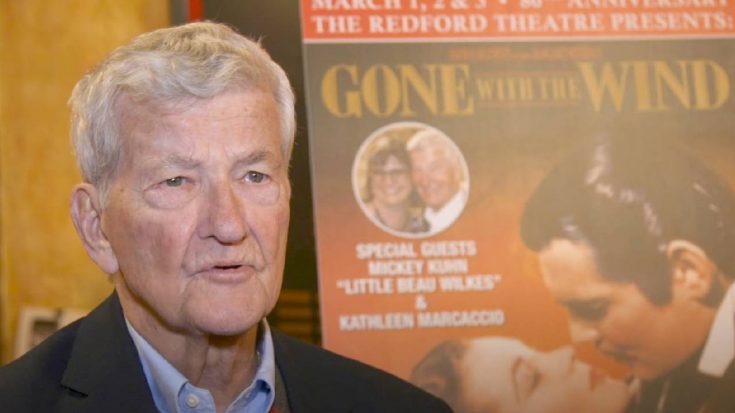 Mickey Kuhn, who was just six years old when he filmed Gone With The Wind, has passed away at the age of 90. He was the last living cast member. Kuhn played Beau Wilkes, the son of Melanie Hamilton and Ashley Wilkes, played by Olivia de Havilland and Leslie Howard, respectively.

At 87, Mickey Kuhn, who played Beau Wilkes, is now the last surviving credited cast member from Gone with the Wind. Having also appeared in A Streetcar Named Desire, he is also the only actor to have appeared with Vivien Leigh in both of her Oscar-winning performances. pic.twitter.com/s2wyLmXONV

Kuhn started acting at the age of two years old and continued after Gone With The Wind, which was released in 1939.

Mickey Kuhn, actor who was best known for playing Beau Wilkes in Gone With The Wind and was the last surviving cast member from the film, has died at the age of 90. RIP Mickey 💔 pic.twitter.com/aMlYyJExuB

Other films he made appearances in were Juarez (1939), A Tree Grows in Brooklyn (1945), Red River (1948), and Broken Arrow (1950). He had a small role in the 1951 film A Streetcar Named Desire. He played a sailor who shows Blanche DuBois, who was played by his Gone With The Wind co-star Vivian Leigh, to the correct streetcar to get to her sister’s house.

Leigh won an Academy Award for both Gone With The Wind and A Streetcar Named Desire, making Kuhn the only actor to appear in both her Oscar-winning movies. Before his passing, he was also the last remaining cast member from Streetcar.

He also appeared in several westerns, including Red River with John Wayne.

Before leaving the entertainment industry in 1956, Kuhn served in the US navy from 1951-1955 as an aircraft electrician. He then worked for American Airlines and the Boston airport in various administrative roles until his retirement in 1995. In 1985, Kuhn married his wife, Barbara, and they had two children.

Our thoughts and prayers are with Barbara and their children as they mourn his loss.