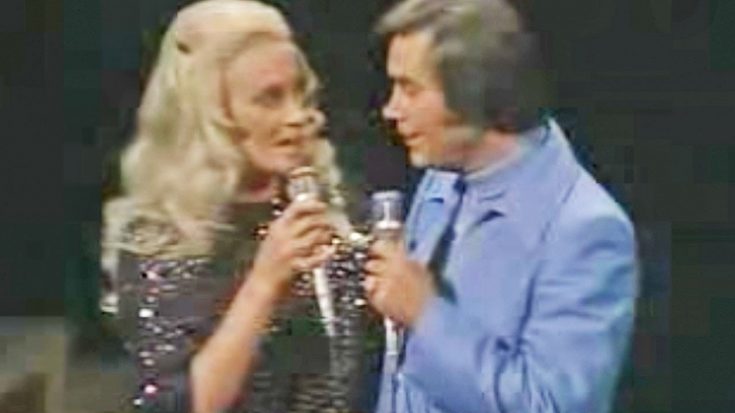 From Johnny Cash and June Carter to Tim McGraw and Faith Hill, the genre of country music has given birth to some of the most iconic couples. However, debatably one of biggest and most explosive couples to ever come about was that of Tammy Wynette and George Jones.

While their marriage was dissolved after five years, the union between the two icons gave country music some of the most beloved duets, including “We’re Gonna Hold On,” “Near You,” and the iconic “Golden Ring.” Two years after their divorce in 1974, Jones and Wynette reunited for a performance of “Golden Ring.”

The old friends took the stage for their performance of the country ballad that tells the story of a couple who fall in and out of love, Jones changing one peculiar line of the song for the occasion.

“Tammy said ‘One things for certain,” he sang to a blushing Wynette. “‘I don’t love you anymore’.”

The country music legends closed out their performance with a kiss. In addition to their performance of “Golden Ring,” the singers reunited in the nineties to record their final album together, One, released in 1995.

Both remarried before their respective deaths, Wynette marrying two more times before her passing in 1998. Even though they each went on to find love with someone else, many related “He Stopped Loving Her Today” with Wynette following Jones’ death in 2013.

You can watch their performance of “Golden Ring” below.

See Fan Reactions To George Strait Being Mentioned On…