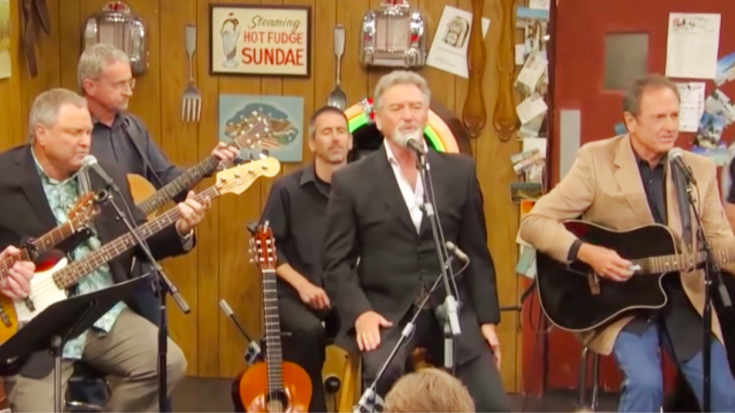 For decades, Larry Gatlin and his brothers Steve and Rudy have treated country music to their well-written songs and sweet, sweet, harmonies. It’s no wonder why the group, known as Larry Gatlin and the Gatlin Brothers, is regarded as one of the best and most beloved in all of country music.

Even if you don’t know much about the Gatlin Brothers’ music, you’re surely familiar with their iconic hit, “All the Gold in California.” Known as one of the group’s signature songs, it was written entirely by Larry, and produced by all three of the Gatlins.

Released in August 1979, “All the Gold in California” was the group’s first-ever number one hit. It held on to the chart’s top spot for two weeks, and was on the chart for ten weeks overall.

Years would pass before the Gatlins would score their second, and only other chart-topping hit in the U.S. That song, titled “Houston (Means I’m One Day Closer to You),” was released in 1983.

The song also topped the Canadian country chart, while “All the Gold in California” did not. Still, there’s no denying that its success wouldn’t have been possible if it wasn’t for its predecessor.

After all this time, country fans still love “All the Gold in California” just as much as they did when it was released. On top of that, the Gatlin Brothers still sound just as good singing the song as they did way back in 1979.

It Still Sounds Just As Good

When the sibling group made an appearance on the popular country music television show Larry’s Country Diner, they knew they couldn’t leave without treating everyone to a performance of their signature song.

The group’s rich vocals filled the room within seconds of kicking things off. You’ll be enchanted throughout their performance as you take in the sound of their smooth-as-honey harmonies.

If the phrase “music to your ears” could ever be applied to a performance, this would be the one. Please enjoy it in the video below.