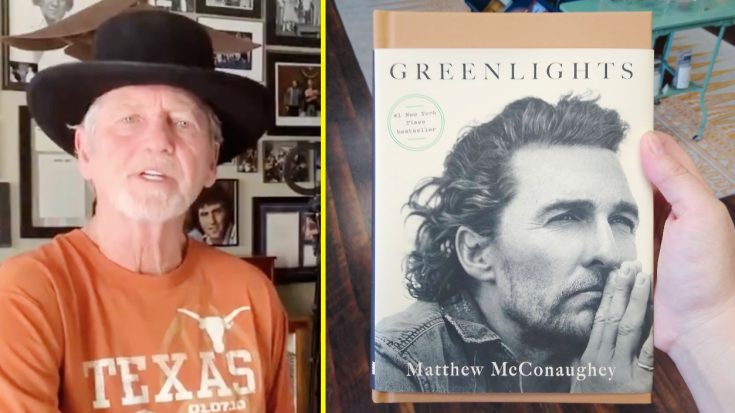 On October 20, 2020, Academy Award-winning actor Matthew McConaughey released a book titled Greenlights. It is described as a memoir, but the actor prefers to call it an “approach book.”

The book, which is comprised of journals that he started keeping when he was 14 years old, debuted at the top of the New York Times best-seller list in the non-fiction section. Greenlights is split up into parts, rather than chapters and in Part Five: Turn The Page, McConaughey writes about a musician he just refers to as “Larry.”

He wrote that Larry, who was in the height of his career with several hits to his name, was struggling with drug addiction and thanks to University of Texas Football Coach Darrell Royal, he was able to “turn the page” and get help, even though Larry attempted to use every excuse in the book to not get clean.

In a new interview with PEOPLE, country legend Larry Gatlin reveals that he is the Larry in McConaughey’s book. The actor told a story about how the late Coach Royal spotted some cocaine on Larry’s nose at an event. The next day, Larry went to the coach’s house to express his embarrassment and ask him for guidance on what he should do next.

According to Gatlin himself, Royal told him, “Larry Wayne, I have never had any trouble turning the page in the book of my life. It’s time you turned the page.”

He has been sober ever since, which the book says is 46 years, but in a Twitter video, Gatlin says that was 37 year years ago.

“Coach Royal did not send me to treatment … he took me to treatment,” Gatlin told PEOPLE. “Darrell knew what I was doing. He was one of the smartest and wisest men. And his wife? They both really did save my life. I think about it every day. Hopefully, I’ll be there to help somebody sometime like they did for me. I would be long dead if it hadn’t been for them.”

His family knows the story so well that after his daughter read the book, she called him up and said, ‘Dad, you are in Matthew McConaughey’s book … I know that’s you.'”

Gatlin read the section about him and posted it to his Twitter page, which you can watch below.