Dolly Parton Never Calls Husband By His Given Name, Instead Uses A Playful Nickname 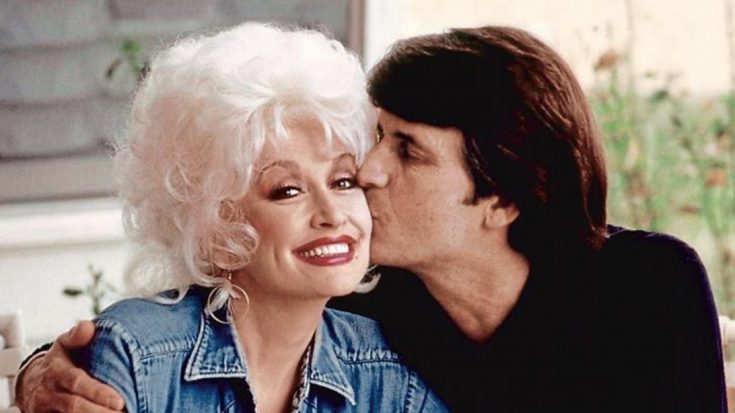 Dolly Parton and Carl Dean have a marriage that many in the entertainment industry envy. But, after 55 years of wedded bliss, Dolly knows how to make Carl upset….call him by his given name.

In an interview with Ladies Home Journal, Parton revealed that she and her husband don’t call each other by their first names. They instead opted for adorable terms of endearment. The reason? Dean gets upset when she calls him Carl.

“It makes him fee-urious when I call him Carl,” Dolly said. “I always call him Daddy and he calls me Mama or Little Kid or Angel Cakes. Sometimes he calls me Dotty to be silly: ‘Okay, Li’l Dotty.’ Maybe once a year I call him Carl and it seems so cold that it really upsets him. Then he gets back by calling me Dolly, which cuts me to the quick.”

Dolly first met Carl Dean at the Wishy Washy laundromat in 1964, and was immediately struck him.

“I was surprised and delighted that while he talked to me, he looked at my face (a rare thing for me),” Parton says on her website. “He seemed to be genuinely interested in finding out who I was and what I was about.”

Two years later the couple wed in a tiny intimate ceremony attended only by Dolly’s mother, the preacher and the preacher’s wife.

Over the course of their marriage, Dean has mostly stayed in the background, allowing Dolly the freedom to embrace her career and status as a country music icon. Dolly admits that the two are complete opposites, but that’s what has made their marriage a success.

“We’re completely opposite, but that’s what makes it fun. I never know what he’s gonna say or do. He’s always surprising me,” Dolly told PEOPLE in 2015.

When they have a chance to unwind they like to go on short RV adventures. “I love to read, I love to cook, I love to be with my husband. I put on my little comfy clothes…I call them my baby clothes…and we just relax.”

The “Jolene” singer added that when they go on vacation they keep it short because Dean likes to be home. “He knows I’m just the opposite. I can’t go enough places. I can’t do enough things. He loves that. He’s independent. He doesn’t need me in his face, and it’s the same with me,” Dolly said. “But when we’re together, we have enough things in common that it works. We love the simple life. We can be calm and just have a good time.”

Dolly Parton and Carl Dean never had children, but it wasn’t because they didn’t want them. Dolly told The Guardian in 2014 that the pair had talked about having children shortly after they married, even picking out a name for a baby girl.

“If we’d had a girl, she was gonna be called Carla…Anyway, we talked about it, and we dreamed it, but it wasn’t meant to be,” Dolly said.

In a 2017 interview with TODAY, Dolly addressed the topic again, saying: “God has a plan for everything. I think it probably was his plan for me not to have kids so everybody’s kids could be mine. And they are now.”