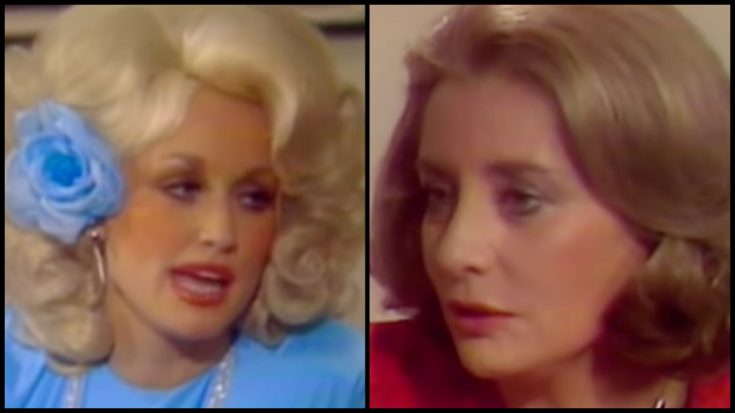 There are many reasons to love Dolly Parton, and one of those reasons in on full display during a 1977 interview the singer did with Barbara Walters.

By 1977, Dolly Parton had been in the music business for just over a decade and had already released 19 studio albums and had a pile of awards to her credit. The singer was well on her way to becoming one of the biggest female stars in country music. People fell in love with her voice, her larger than life persona, her sense of humor and her kindness. Not much has changed about Dolly since then, as evidenced in a 44-year-old interview with legendary television journalist Barbara Walters.

In the interview, Walters asked several questions that most celebrities would have taken offense to and would likely have responded to with negativity. Instead, Dolly kept her cool and turned the condescending questions into a positive.

“It’s certainly a choice,” replied Parton. “I don’t like to be like everybody else. I’ve often made the statement that I would never stoop so low as to be fashionable. That’s the easiest thing in the world to do.”

Dolly added that she decided that she needed a look that would get everyone’s attention, and once people got past that they would realize that she is special where it counts. “Once they got past the shock of the ridiculous way I looked, then they would see there’s parts of me to be appreciated. I’m very real where it counts…and that’s inside,” Dolly said. “Show business is a money-making joke and I just always like telling jokes.”

Walters then asked a question that would shock most people. “Do you ever feel like you’re a joke, that people make fun of you?”

Dolly replied kindly and in such a manner that could only be done by Dolly Parton.

“I know they make fun of me. But, actually all these years people have thought the joke was on me, but it’s actually been on the public. I know exactly what I’m doing, and I can change it at any time. I make more jokes about myself than anybody,” Dolly said before adding, “I am sure of myself as a person. I am sure of my talent. I’m sure of my love for life….And I’m very content. I like the kind of person that I am. So I can afford to piddle around and do-diddle around with make-up and clothes and stuff. Because I am secure with myself.”

Watch a clip of Dolly Parton’s interview with Barbara Walters below to see for yourself why we love Dolly.