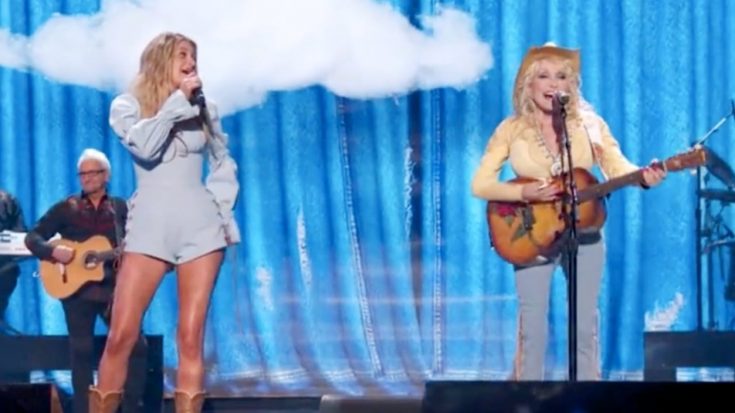 Monday (March 7) was a big day for Dolly Parton. It was the day she released her brand-new novel, Run, Rose, Run, which she co-wrote with James Patterson. Monday was also the day Parton co-hosted the 2022 ACM Awards with Jimmie Allen and Gabby Barrett.

Just three days prior (March 4), Parton released her latest album, which is titled Run, Rose, Run as well. The album serves as a companion to the novel.

On top of co-hosting the ACM Awards, Parton performed too. It gave her the perfect opportunity to showcase one of her new songs, “Big Dreams and Faded Jeans.”

Parton added a little something extra to her performance…a duet partner! That duet partner was none other than Kelsea Ballerini.

A few days before the ACM Awards, Ballerini posted a photo on Instagram that shows her and Parton sharing a hug. Ballerini made it clear how excited she was to sing “Big Dreams and Faded Jeans” with Parton.

“just a couple of east tennessee girls getting ready to sing together at the @acmawards,” Ballerini captioned the photo.

Country fans had been looking forward to Parton and Ballerini’s performance ever since it was announced. The wait turned out to be well worth it!

Parton started off singing solo in front of a backdrop resembling bright blue denim. Ballerini joined her in the middle of the song, and added even more spunk to the already fun tune.

We think it’s safe to say that Parton and Ballerini’s collaboration was a highlight of this year’s ACM Awards! You can watch it in the video below.

Big dreams came true on the #ACMawards stage for @KelseaBallerini tonight as she took the stage with @DollyParton to perform "Big Dreams and Faded Jeans." ? Don't miss another amazing moment like this one and tune in on @PrimeVideo. pic.twitter.com/iUGKL0eiyh