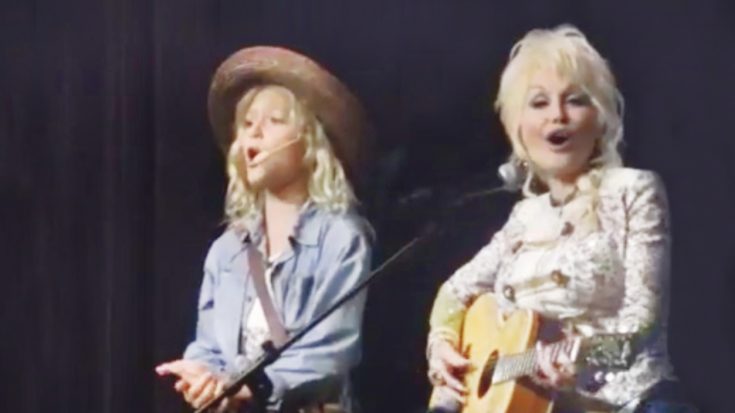 Dolly Parton has performed her hit song “Tennessee Mountain Home” on several occasions – but never like this! During a Dollywood expansion announcement, Dolly was joined on stage by a very special guest.

A Song With A Story

Dolly wrote “Tennessee Mountain Home” based on her own life growing up in the rural mountains of Tennessee. The meaningful lyrics tell the story of one’s love for home. Reminiscing on her childhood, Dolly wrote,

Dolly’s “Tennessee Mountain Home” made a special appearance in her autobiographical movie, Coat Of Many Colors. Depicting her life growing up in the backwoods, she follows a young Dolly through the trials and tribulations her family dealt with. The film premiered on NBC in December of 2015 and was an instant hit. The Academy of Country Music honored the film with the prestigious “Tex Ritter Award.”

It was hard to find someone as talented and sassy enough to play Dolly Parton as a child, but young actress Alyvia Alyn Lind caught the producers eye. Dolly herself was floored by the young talent and helped in the hand picking of her part. Dolly even got to deliver the news to the little one herself!

Throughout the movie, Lind sings a variety of Dolly’s songs gracefully but during the singer’s big announcement – the bubbly girl teamed up for a performance of a lifetime with her idol. Sitting side-by-side with the Smokey Mountain Songbird, she belted out the famous, “My Tennessee Mountain Home.”

The duet was a segway into the announcement that Dollywood would be undergoing a $37 million expansion. The park already has a replica of Dolly’s childhood home but the expansion will bring in more jobs for the local community – just as Dolly had hoped.

Dolly is known for her charity and love of giving back – and this duet is no different. Whether through philanthropic adventures or her music, she is always proving her selfless character.

You can watch the full video of these two below.