Craig Morgan Is A Grandpa…Again – Introducing His Granddaughter, Winnie 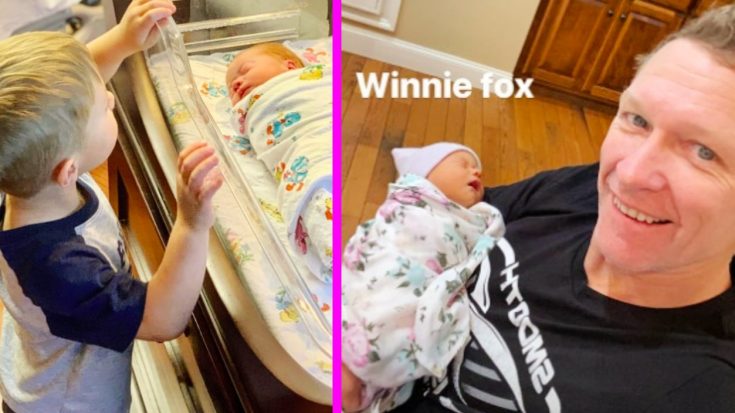 Craig Morgan is a grandpa…again!

Craig and his wife, Karen, share five children: daughters Marissa and Alexandra “Aly,” and sons Kyle, Jerry, and Wyatt. Sadly, Jerry passed away in 2016 at the age of 19.

His passing led Craig to write his current single, “The Father, My Son, and the Holy Ghost.”

As you can tell from that song, family is everything to Craig. So you can imagine the joy he felt on Tuesday (November 19) when his daughter Aly gave birth to a beautiful baby girl!

Aly introduced her newborn daughter on Instagram, revealing that her name is Winnie Fox. She said Winnie arrived at 11:41 PM on November 19 and weighed 6 lbs, 5 oz.

Craig shared the same photo on his own Instagram, simply writing, “Pure love,” in the caption.

Then, on Friday (November 22), Craig shared a photo of himself holding Winnie. The photo appeared in his Instagram Story, and he wrote “Winnie Fox” off to the side.

Craig can be seen beaming at the camera as he holds the newborn in his arms…it’s clear he’s a proud grandpa!

Being a grandparent is something Craig has enjoyed ever since Cruze was born. In 2016, he introduced a then-baby Cruze to the crew of Fox & Friends, and spoke about what it was like being a new grandpa.

We’re sure Craig thinks being a grandpa is extra awesome now that he has a brand-new granddaughter. You can see more photos of Winnie Fox below.

And just like that, we are a family of four and headed home! ?: @mcochrane

Isn’t it sweet to see how affectionate Cruze is with his baby sister?

Congratulations to Craig and his entire family on their newest addition. She is as precious as can be!