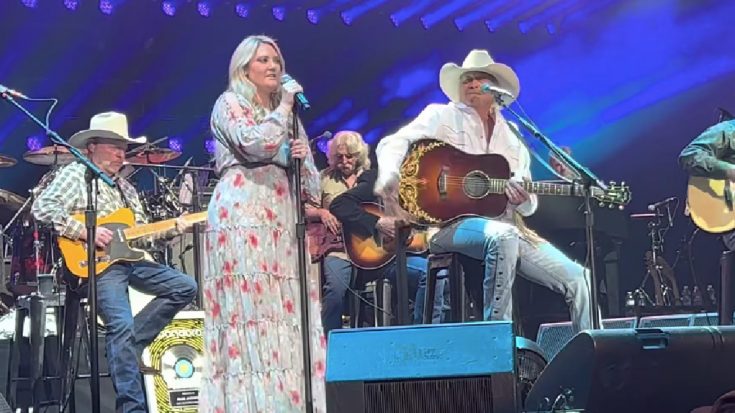 Alan Jackson concert attendees were treated to a surprise when the singer’s daughter, Ali Jackson Bradshaw, joined him on stage to sing the song he wrote for her and her sisters.

During Friday night’s concert (October 8) at Bridgestone Arena in Nashville, Jackson invited Ali on stage to help him sing “You’ll Always Be My Baby.” Ali seemed as ease on stage as she stood behind the microphone and took turned singing lead with her dad. Alan occasionally harmonized with his daughter while looking at her adoringly. When their performance ended, Ali and her dad shared a hug and he gave her an affectionate kiss on the forehead.

Alan Jackson wrote “You’ll Always Be My Baby” at the request of his oldest daughter Mattie when she was getting married a few years ago.

“I wrote the song for Mattie’s wedding the summer of 2017, but it was so hard to do. I told ’em, ‘I wrote this for all of you,’” he explained in a media release.

Ali, 28, married Sam Bradshaw in July of 2020 and their stunning adults-only wedding was featured on the cover of Inside Weddings earlier this year.

Ali is second of three daughters Alan Jackson shares with his wife of more than 40 years, Denise. It’s clear that Alan shares a special relationship with all of his daughters, as evidenced in the music video for “You’ll Always Be My Baby,” released earlier this year. The video features throwback photos of the Jackson family that show Mattie, Ali, and Dani at various stages of growing up.

Check out Ali Jackson Bradshaw and Alan Jackson’s live performance of “You’ll Always Be My Baby” at Bridgestone Arena below.