1972: Loretta Lynn Became The First Woman To Win CMA Entertainer Of The Year 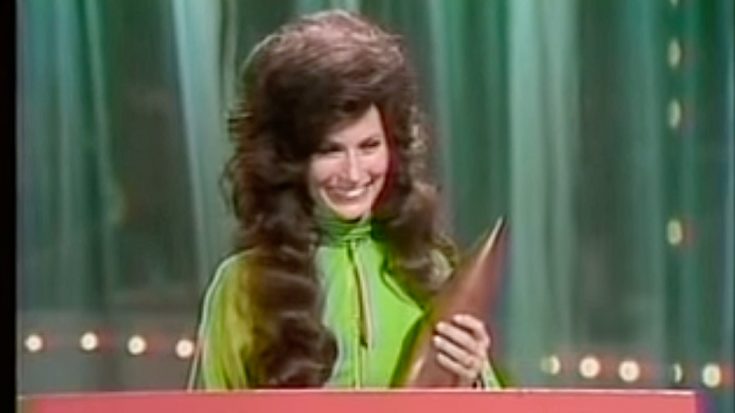 Loretta Lynn was a trailblazer unlike anything country music has seen before or since.

With a career that spanned six decades and more accolades than can be counted, Loretta Lynn paved the way for women in country music. She’s called the First Lady of Country Music with good reason….she accomplished more “firsts” in the genre than any other woman in the business.

The First Lady of Country Music had an impressive list of firsts.

In 1972, Loretta Lynn became the first woman named Entertainer of the Year by the Country Music Association.

She was presented with the trophy by legendary comedian Minnie Pearl and guitarist Chet Atkins. Lynn received a standing ovation as she made her way to the stage to accept her award. After being handed the trophy, Lynn reflected on her career successes

“I’d like to say that I’ve won a lot of awards, and this is one that I’ve been nominated for before but I never did get,” Lynn told the crowd. “This, I think, is the only one that I haven’t gotten.”

Lynn added that she was happy about the win, but joked that her joy was only dimmed by one thing.

“My husband is gone huntin’…he couldn’t make it back in to share my happiness with me,” Lynn said of her husband, Doo.

In addition to her CMA accomplishment, the “You Ain’t Woman Enough” singer was the only woman named “Artist of the Decade” for the 1970s by the Academy of Country Music, and became the first female country artist to receive a star on the Hollywood Walk of Fame in 1977.

Despite her many awards, there is perhaps one achievement she is most proud of.

Loretta Lynn’s accolades also include membership in the Grand Ole Opry, an honorary doctorate from Berklee College of Music, a Grammy Lifetime Achievement Award, induction in the Songwriters Hall of Fame, a Presidential Medal of Freedom, a Billboard Legacy Award and the CMT Artist of a Lifetime title.

But, there is one achievement that the singer accomplished that none other has done. She threw the doors wide open for women in country music. Her edgy, and sometimes controversial, songs were something the genre had never heard before. She called her songs about birth control and divorce “songs about every day living.

When asked why it was important for her to sing about the topics, Loretta told Billboard, “Nobody had done it, for one thing, and I thought it should be done. A woman shouldn’t be looked down on.”

Loretta didn’t hesitate when asked if she felt like she helped open doors for other women in the business.

“I think I have done quite a bit. I’m probably one of the girl singers who have helped other girl singers getting in the business, because it is harder for girls to get on labels and be out there,” Loretta said.

Loretta Lynn died on Tuesday, October 4, leaving behind an incredible legacy for all country artists…male, female, young and old. Her contributions to the genre will never be forgotten.