Why Larry Hagman Called This “I Dream Of Jeannie” Scene “Mortifying” 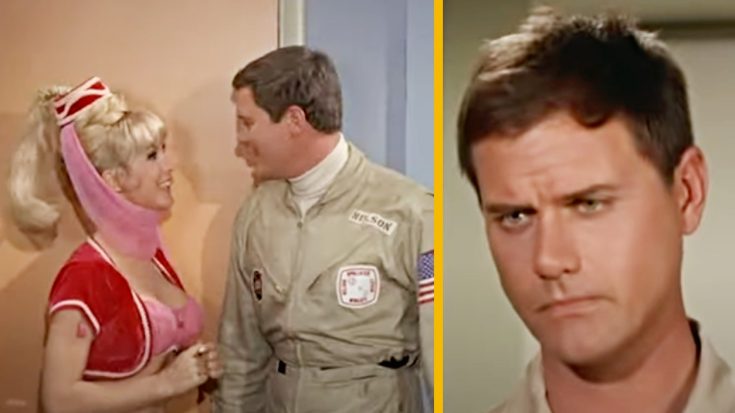 Before starring as J.R. Ewing in Dallas, Larry Hagman and Barbara Eden won viewers’ hearts with their hit sitcom, I Dream of Jeannie.

In the memoir, Hello Darlin’!: Tall (And Absolutely True) Tales About My Life, Hagman opened up about his time portraying astronaut Tony Nelson on I Dream of Jeannie. He also revealed one of his most “mortifying” moments on the show.

According to Hagman, the show’s production team had to be very creative with special effects. He admitted that the cast would freeze in their marks while an object or genie “power” was positioned for the next frame. One of the most Hagman’s most memorable moments with the special effects team involved an elephant on set. In the memoir, he wrote:

“One time Barbara and I were doing a scene in which Jeannie popped in on an elephant. After the director told us to freeze, they brought in a live elephant, except they brought him in backward, so his ass was to the camera. We couldn’t turn him around. He wouldn’t budge.”

Hagman noted that the director eventually gave up on trying to position the elephant. Instead, the cameras began to roll, and Hagman resumed dialogue with Barbara Eden.

“As I protested the elephant being there — he was right next to me — he lifted his tail and broke wind, literally all over me. Perhaps that’s what the elephant thought of my acting,” Hagman admitted in his book.

The experience was hilarious and somewhat “mortifying” for Hagman. Still, he held his composure for the scene until the director finally cut cameras.

Relive Hagman and Jeannie’s chemistry on set in the video below.