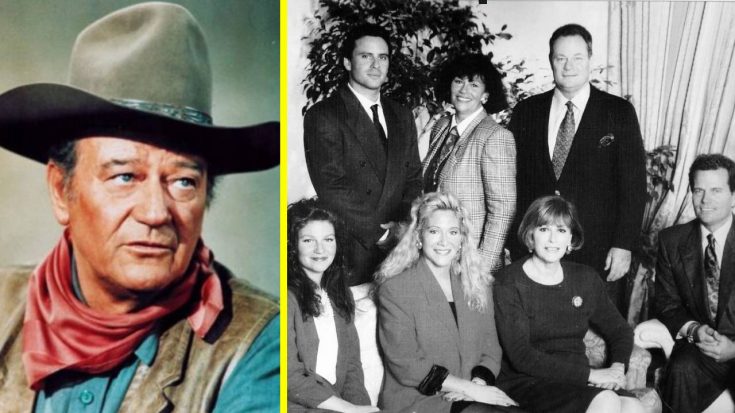 Marion Robert Morrison was known to the world as John Wayne, one of the biggest movie stars of his time. While to most people, he was a big celebrity, to his seven kids, he was just “Dad.”

The actor was first married to Josephine Alicia Saenz and they had four children together: Michael, Mary, Patrick, and Melinda. He was then married to Mexican actress Esperanza Baur, and finally, Peruvian actress Pilar Pallete. John had three children with Pilar: Alissa, John Ethan, and Marisa.

Some of John’s children followed in his footsteps into the entertainment industry. Let’s meet them all!

Michael used his dad’s stage name and was known as Michael Wayne. While his father was a force to be reckoned with in front of the camera, Michael enjoyed it behind the scenes. Michael worked his way up from Production Assist, to line producer, to producer, and even worked on several of his father’s films including The Green Berets, Cahill U.S. Marshal, McLintock! and The Alamo.

Mary Antonia, who went by “Toni,” appeared in her dad’s films The Quiet Man and The Alamo. She married Donald La Cava in 1956 and they had eight children together: Anita, Mark, Brigid, Kevin, Christopher, Peter, David and Brendan. Toni was a private person and raised her family out of the public eye. She passed away in 2000 at the age of 64.

Patrick became an actor at an early age – he made his film debut at age 11! He is credited for appearing in 40 films, 11 with his legendary dad. He has had a long career in film, and television, and even hosted two game shows – The Monte Carlo Show and later Tic-Tac-Dough.

Patrick Wayne (one of John Wayne’s sons) with young Jane Seymour in Sinbad and the Eye of the Tiger (1977). pic.twitter.com/xxpy9opkBf

“If my father met someone, he was more interested in that person than himself,” John Wayne's daughter, Melinda recalls. “He wasn’t snobbish. He would ask you questions. He was very interested in people and life.” #FathersDay2019 pic.twitter.com/AHtYlFdV0U

While Melinda did not stick with acting, she did make cameos in a few of her father’s movies as a child. In 1964 she married Gregory Robert Munoz and they had five children together before divorcing in 1985. Melinda currently lives on Balboa Island in Newport Beach, California.

Aissa, John’s first child from his third marriage, is currently an attorney, but like her siblings, appeared in several John Wayne films as a child. In 2016, she endorsed Donald Trump for president when he made an appearance at the John Wayne Museum in 2016.

"He was really a loving dad and granddad. It was cute seeing him with the grandkids — he would get all ‘goo-goo’ and ‘gaga.’ He was just a jolly guy.” – Aissa Wayne on her father, John Wayne pic.twitter.com/iXRuiLOMIv

Aissa has three children, including country artist Jennifer Wayne, who is a member of the band Runaway June. Check out a video of Jennifer singing a song she wrote about her grandfather called “God Bless John Wayne.”

Although John Ethan, who goes by his middle name, may have a different mother than Patrick and Michael, you can definitely tell they are all brothers. Ethan was born in 1962 and has appeared in many different works as both an actor and a stuntman.

Ethan now serves as the manager of John Wayne Enterprises and is the director of the John Wayne Cancer Foundation and created its Team DUKE fundraising program in honor of his father.

@thieveshours and Marissa Wayne meet at the Manhattan Coffee house. All have friends in #Snyder! pic.twitter.com/2Zo5x7vs

John’s youngest daughter often visited her dad on set, though she was never bit by the acting bug. She did appear in a couple of his movies as a kid. Marissa married husband Tony Ditteaux on May 4, 2005 and they have two children.

John Wayne and his daughter, Marissa. The Duke died in June 1979 pic.twitter.com/ahkZrDRswb

All seven of his children worked – and continue to work – to keep their father’s legacy alive. He must be so proud of them all! Check out some more family photos below.

John Wayne at home with kids Ethan, Marissa, and Aissa and wife Pilar in 1969 pic.twitter.com/Cz6BNwACNU

John Wayne with daughter Melinda on her wedding day April 4, 1964. She was married for 21 years and has 5 children. pic.twitter.com/vaL5PLRkMH

John Wayne loved having his family with him on set and the children would travel all over the world to be with their dad. Do you know what set Michael & Patrick Wayne were visiting in this photo? 📷 #JohnWayneTrivia pic.twitter.com/XZwNGVVkX9

Walking in to the weekend like 💪🏼 Patrick, John, and Michael Wayne at Toni Wayne's wedding in 1956 pic.twitter.com/OiorQU5W65