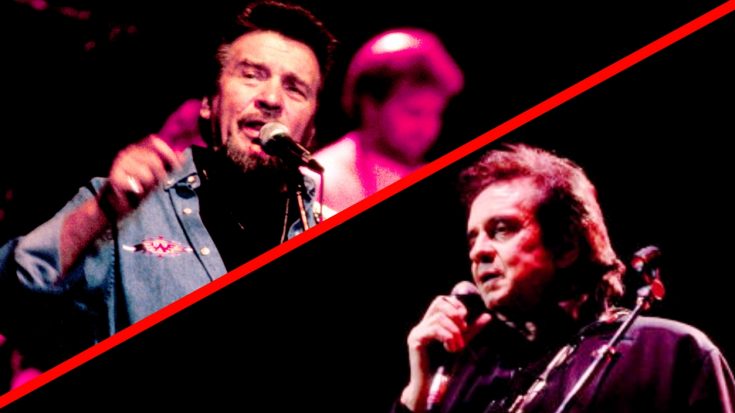 Whenever you think of outlaw country music, Waylon Jennings and Johnny Cash are two of the first names that come to mind. And understandably so.

After all, they were both known for their rough and rowdy personas, intense lifestyles, and rejection of the popular Nashville sound.

With such similar outlooks regarding life and music, the two artists were destined to become friends. And they did.

In fact, they were pals a lot longer than many may realize, as they were roommates in Nashville early on in their careers.

Forming A Supergroup Of Friends

Together, the four outlaw stars embarked on a ten-year journey from 1985-1995, during which they recorded three albums and participated in numerous live performances.

But one event that occurred part way through the group’s run had the power to cut their time short, and in turn, alter the entire course of country music history.

This event happened to be Waylon’s heart surgery, which he underwent in 1988. He had a previous health scare the year prior, when he had to have a stent put in after experiencing some chest pains.

The stent was only a temporary fix, and Waylon needed to have a triple bypass. He underwent surgery at the Baptist Hospital in Nashville, and it was a success. His son, Terry Jennings, wrote in his book, Waylon: Tales of My Outlaw Dad, about how he felt after the operation.

“Dad said he was feeling fine and that his feet were warm for the first time in years,” Terry said.

Obviously, Waylon’s surgery ended up saving his life. He lived for 14 more years after that, and got the chance to continue on with the Highwaymen and enhance his own solo career.

It’s crazy to think of all the songs we would have lost if Waylon had never gone in for that surgery, including “Wrong,” “Where Corn Don’t Grow,” and “The Eagle,” just to name a few.

But Waylon’s survival wasn’t the only way that his surgery ended up changing the course of country music history.

Saving The Life Of A Friend

It also altered the genre’s history by saving another life…the life of his good friend Johnny Cash.

As Terry writes in his book, his stepmother Jessi Colter had told him that Johnny had stopped by to wish Waylon well before his surgery.

When Waylon told Johnny how he had been feeling, Johnny realized he had been experiencing similar symptoms.

“The doctors gave him a good looking over and determined that he needed triple bypass surgery right away too,” Terry wrote.

Johnny was whisked away, and underwent the same life-saving surgery that day. He and Waylon ended up recovering in rooms located on the same hall.

“We left a couple of days later with Dad still in ICU doing well,” Terry wrote. “He and Cash were supporting each other.”

If it hadn’t been for Waylon’s surgery, Johnny would have never paid him that simple social call, and likely never would have known that his own life was at risk. If we had lost Johnny because of that, we also would have lost a wealth of wonderful music, such as his passionate rendition of “Hurt.”

Waylon’s triple bypass didn’t just end up saving his own life, but the life of his best bud as well. The timing of things was just right, and because of that, we got to enjoy both outlaw legends for an extra decade and then some.