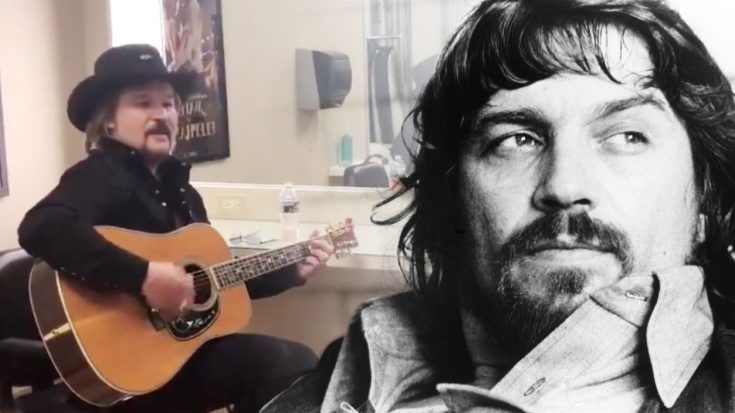 Two country artists came together recently to pay tribute to the outlaw legend himself, Waylon Jennings.

While sitting backstage in a dressing room, Travis Tritt was joined by Real Country co-star, Jake Owen for an impromptu jam session. The duo grabbed a couple of chairs and a guitar – turning their ordinary dressing room into an intimate stage for the performance.

Throughout the video, Owen adds his vocals to Tritt’s twangy voice and guitar playing. As they cover Waylon Jennings’ “Brand New Goodbye Song” – the two can’t help but chuckle at the lyrics.

“Put on your warm coat honey, it’s gonna be cold tonight/ Put on the one that’s warm and long/ ‘Cause you’re just before hearin’ my brand new goodbye song/ Baby, I’ve tried your doctors, they just couldn’t make me well/ The higher I tried to climb, the further I fell/ Guess it must have blew my mind sniffing the fumes of Hell”

The smile on Owen’s face says it all – he is in the presence of greatness singing the song of a legend. Outlaw Waylon Jennings first recorded the song in 1977 for his Ol’ Waylon album that remained on Billboard’s Top Country Albums chart for 13 weeks – earning him a platinum record.

Owen’s Real Country co-star, Travis Tritt has made quite the name for himself in country music as well. A country legend – Tritt has received two Grammy Awards, four awards from the Country Music Association, and was inducted as a member of the Grand Ole Opry in 1992. Some of his more popular songs include “It’s A Great Day To Be Alive” and “Here’s A Quarter (Call Someone Who Cares).”

After Jennings passing, Tritt dedicated his performance of “I’ve Always Been Crazy”  to Jennings at the Grand Ole Opry. He opened saying, “Waylon taught us a lot of lessons, and we’ve all borrowed from him at some point or another and we’ve all learned from him.” What many new fans of country music might not know – is that Tritt considered Jennings a close, personal friend and often sang with him.

Now, Tritt is still singing for his old friend – and recruiting the next generation to keep the memory alive! Owen is no stranger to referencing classic songs in his music. His new song “I Was Jack (You Were Diane)” brings us back to 1982 when John Mellencamp‘s classic hit “Jack & Diane” first talked about young love in America. Owen understands the effect nostalgia has on people and the importance of keeping the tradition alive for the next generation of musicians.

In an interview with USA, he explained his reasoning for joining the Real Country judge panel saying, “Country music truly seems to be the healing factor in a lot of people’s lives. I will always be grateful for music, whether I’m performing or listening, and I want to encourage up-and-coming artists to tell their stories, find their audiences and make their mark in country music with the same guidance that artists have given to me throughout my journey.”

It is no wonder Tritt was willing to jam out with Owen backstage to a song written by his own guiding artist. Tritt retweeted the video saying,

“I’ve never met a young man who has a better understanding or knowledge of what traditional and roots country music is than he does. Many of his influences are so similar to mine.”

In addition to the level of respect both artists have for Jennings – the best part about the recording is that they absolutely nail it!

Just a little Waylon Jennings jam session with a legend himself @Travistritt … this #RealCountryTV show is already amazing. Come see us in person next week! https://t.co/AlpUqfvSBz pic.twitter.com/tDcCMVihGQ

It is great to see artists come together and celebrate the musicians that allowed country music to be where it is today.

Check out Waylon Jennings’ original recording of the song below and let us know if you think these two country stars did it justice!