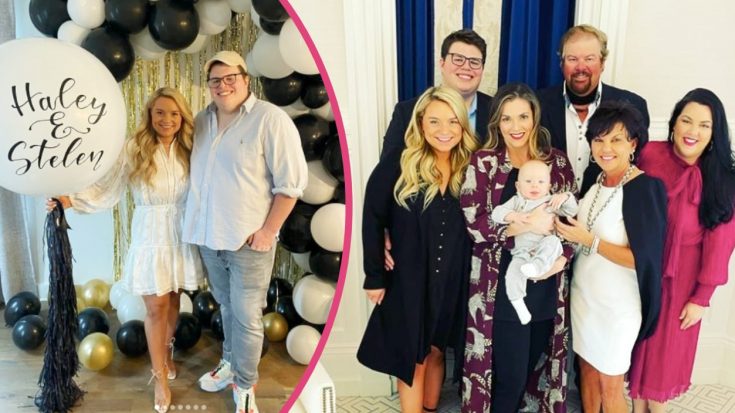 On top of being a country music superstar, Toby Keith is a husband and father. He married Tricia Lucas in 1984, and adopted her daughter, Shelley, that same year.

Toby and Tricia welcomed another daughter, Krystal, in 1985. She has followed in her father’s musical footsteps, and is known for her song “Daddy Dance with Me.”

12 years after Krystal was born, Toby and Tricia welcomed their only son, Stelen.

Toby goes by his stage name, Toby Keith, when he performs. But his legal last name is “Covel,” which is the last name Stelen carries. It’s also the name his new wife, Haley, has taken on as her own.

Stelen and Haley have been together for years. The first photo Stelen shared with Haley was in 2015.

Haley shared some engagement photos in June 2020, saying, “I can’t wait to be your Mrs. Covel.” She tagged Stelen, mentioned Las Vegas, and said they were getting married in November 2021.

The couple finally said “I do!” in early November. Haley posted a video from their first dance as husband and wife, writing, “Married my best friend yesterday.”

Haley later shared a bunch of photos from the ceremony and reception. Everything looked stunning!

As for Stelen, he shared a single picture, and captioned it, “My Mrs.”

Stelen’s big sister, Krystal, also shared a photo from the wedding. “My baby brother got married!!” she wrote next to the picture.

You can see all of the photos from Stelen and Haley’s wedding below. Congratulations to them!