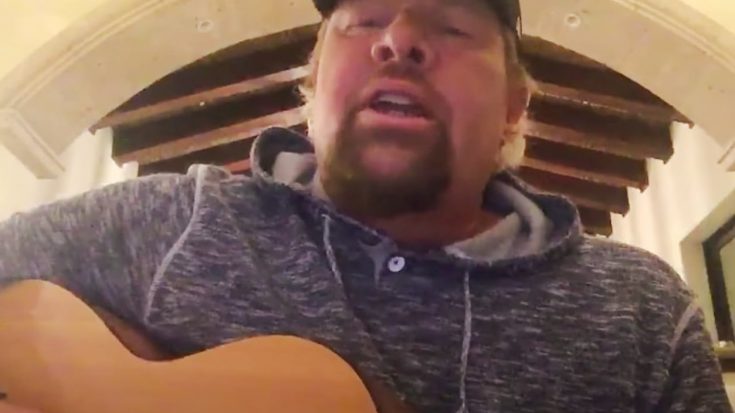 While he was stuck down in Mexico, Toby Keith passed the time by listening to old country songs. Every now and then, he heard a song he wanted to sing himself, and he started sharing those performances online with his fans.

Keith forgot to bring his guitar with him to Mexico, so he had to improvise. He stopped by a furniture store and bought an old guitar, and has used that guitar for his cover performances.

He was clearly enjoying himself, and performed a number of great country tunes. A few songs we’ve heard Keith sing include “Flowers on the Wall” and “Evangelina.”

The former song served as Keith’s way of paying tribute to The Statler Brothers’ Harold Reid, who passed away on April 24, 2020.

Days later, Keith took the time to honor not one, but two country legends with his performance of a song titled “I Couldn’t Be Me Without You.”

The track was written by outlaw country icon Billy Joe Shaver and was recorded by Latin American country singer Johnny Rodriguez. His recording was released in 1976 and was a #3 hit on the country chart in the U.S.

Keith briefly introduced the song before he covered it, saying, “Billy Joe Shaver wrote a little song and Johnny Rodriquez sang the p— out of it.”

He then moved in to his performance, with the old furniture store guitar serving as his only source of instrumental support. We know Keith praised Rodriguez’s vocal performance, but Keith deserves a pat on the back for his own rendition.

Tune in to the clip below to hear Keith tip his hat to Rodriguez and Shaver by performing “I Couldn’t Be Me Without You.”

We’ve been loving these classic and traditional country covers from Keith. Which song would you like to hear him sing with his furniture store guitar?