Tim McGraw Jumps Off Stage To Confront Hecklers During Concert 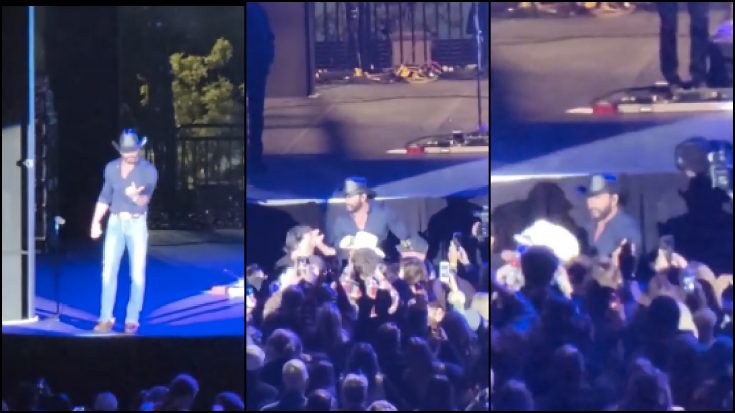 Tim McGraw got a little more than he bargained for at a recent concert in Reno, Nevada. When he forgot the words to one of his songs, a few members of the audience started heckling him and caused the singer to get frustrated.

McGraw was singing his 1997 hit “Where The Green Grass Grows” at a concert on Saturday (October 9) when he forgot some of the lyrics. A group of fans near the stage started giving the singer a hard time about it, causing Tim to bring his concert to a stop so he could deal with the hecklers.

Videos of the incident captured by fans show McGraw telling the hecklers that if they don’t like the way the show is going, they can leave. The singer eventually jumped off the stage to confront those who were harassing him. It’s unclear what words were exchanged between McGraw and the hecklers, but it appeared that some members of his team made their way to the singer to keep things from getting out of control.

McGraw made his way back to the stage and continued his show, but not before explaining why he was struggling to remember song lyrics. The “Don’t Take The Girl” singer explained that he had been up for 48 hours filming the “Yellowstone” prequel , “1883” prior to the Reno concert.

“If I forget words tonight, just know I’m old,” the 54-year-old said. “And I’m shooting a movie and I’m working with my wife.”

“There are a lot of variables in that situation. So, if I forget the words, sing along with me and help me out,” he added.

Watch Tim McGraw confront his hecklers in the video clip below.