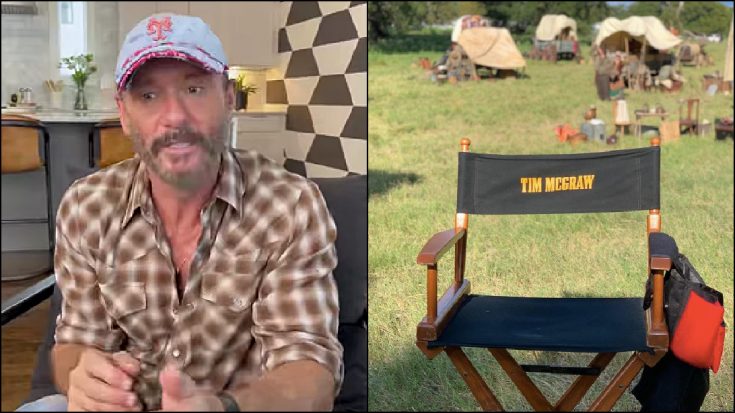 Filming for the Paramount+ Yellowstone prequel, 1883, is underway in Texas, but a post of one of the show’s star’s has fans scratching their heads.

1883 will tell the origin story of how the Dutton family migrated to Montana where they eventually settled. Tim McGraw, Faith Hill, and Sam Elliott are co-starring in the prequel that is currently being filmed in Fort Worth, Texas. According to production, an entire 1800s town was built at the infamous Fort Worth stockyards for filming of the series. The cast will be shooting in other Texas towns as well before making their way to Montana by the end of the first season.

Dozens of behind-the-scenes photos have been leaked, but one picture in particular has left fans with questions. Tim McGraw, who is playing Dutton family patriarch, James Dutton, has occasionally shared glimpses into his life on set, but his wife, who plays family matriarch Margaret Dutton, has yet to be seen.

A recent Instagram post from Tim shows a cast chair with his name in front of tents, wagons, and other items appropriate to the 1880s. The “Not a Moment Too Soon” singer tagged his famous wife in the photo, but she’s nowhere to be seen.

Fans responded to the post with questions about Faith’s whereabouts. “Is Faith hiding in the wagon?” one fan questioned. Others simply begged for a photo of the singer-turned-actress.

While photos of McGraw and many of 1883’s other stars have been captured, Faith Hill has yet to be captured in publicly shared photos on set or in costume. We may just have to wait until the series premiere on December 19th to see Faith in action. In the meantime, we’ll have to settle for the brief preview of 1883 below.