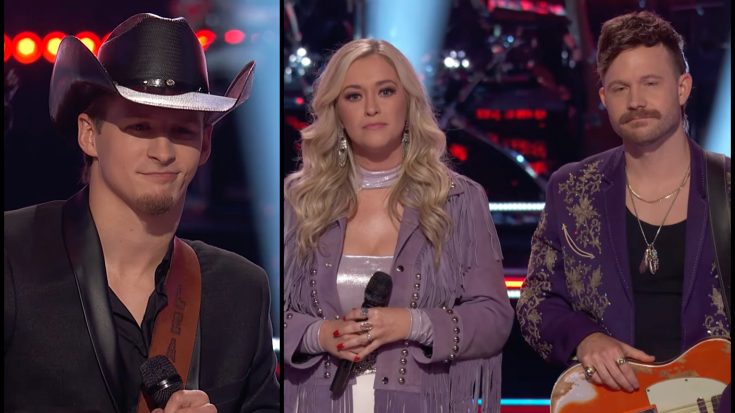 Tuesday night brought the final round of The Voice Battles that included a cover of Brooks & Dunn’s “Red Dirt Road” from Team Blake.

Soloist Bryce Leatherwood and husband-wife duo The Dryes went head-to-head singing the 2003 Brooks & Dunn hit. Despite having technical issues at the beginning of the performance, all three singers pulled it together to deliver one of the best country covers we’ve heard this season.

Bryce Leatherwood landed on Team Blake after earning a three-chair turn during his Blind Audition. After singing a cover of Conway Twitty’s “Goodbye Time,” he was praised for his rich voice and character.

Katelyn and Derek Drye, known as The Dryes, won over Blake Shelton during their Blind Audition with their take on the Dolly Parton and Kenny Rogers hit “Islands in the Stream.”

When Leatherwood and The Dryes took the Voice stage together Tuesday night, there wasn’t an obvious Battle winner. Both acts earned praise from all of the judges, with Camila Cabello and Gwen Stefani telling Blake that they would ultimately choose to keep Leatherwood. But, John Legend sided with the Dryes, saying that their delivery was more dramatic and “electric.”

“Bryce may be the most purely on point vocalist, but I find myself more drawn to the Dryes,” Legend said.

When it came time to make a decision, Shelton chose Bryce to move forward after comparing him to George Strait.

“You deliver and you’re solid, and people react to that,” Blake told Bryce before explaining off stage exactly why he chose the young singer to win that round. “I feel like Bryce is one of those guys, he’s almost unshakeable. He’s only 22-years-old. He’s focused. He knows what he wants to say. And Bryce has the countriest name that maybe I have heard in all of my life.”

But, it wasn’t the end of the road for The Dryes. Host Carson Daly reminded the coaches that the duo were available to save then gave The Drye’s the opportunity to say something to coach Blake.

“We’ve loved you and your music for many years…” Katelyn started. But, before she could finish, Blake pushed his Save button.

“That’s good enough,” Shelton told the pair. “Flattery will get you everywhere.”

Watch The Dryes and Bryce Leatherwood sing “Red Dirt Road” in the clip below.