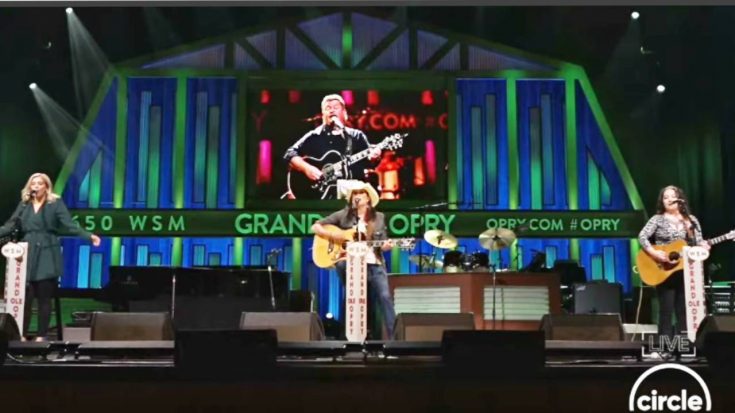 Even though the Grand Ole Opry cannot host live shows with an audience due to the coronavirus pandemic, they have a long-standing record to uphold.

Every Saturday night for the last 94 years, country music fans have been able to tune into the Grand Ole Opry – and they don’t plan on stopping anytime soon. On April 4, the Opry celebrated its 4,918th consecutive Saturday night show, and there was no one sitting in the audience.

To protect as many people as possible, only a select few people were even in the building. The night’s performers, Terri Clark, Ashley McBryde, and Lauren Alaina sat on barstools in front of instruments behind them, which were not manned by any musicians.

The show was broadcasted live on the radio, as well as the Opry’s new weekly program on the Circle Network.

The 4,918th consecutive Saturday Night Grand Ole Opry Show 🎙🎶 thank you to our Opry family for tuning in from around the country and around the world. We love you! (📸: @chrishollo)

Clark kicked off the performance with her 2002 song “I Just Wanna Be Mad” followed by McBryde singing her brand-new single “One Night Standards.” Lauren Alain was up next with her current single “Getting Good.”

This pattern continued, with a few collaborations, until the very last song.

“We’re gonna end on a somber note here,” Clark began, before McBryde said, “But a celebratory one.”

Clark agreed, “A celebratory one. We lost a family member and an amazing man, artist, singer. when Joe Diffie passed away … I’m wearing my John Deere T-shirt here tonight in honor of Joe.”

The trio of women dove into a rendition of Diffie’s “John Deere Green,” which he released in 1993 off his album Honky Tonk Attitude.

Each lady took lead on a verse, but they launch a three-part harmony for each chorus, which was absolutely incredible. We know Joe was smiling from above during this tribute.