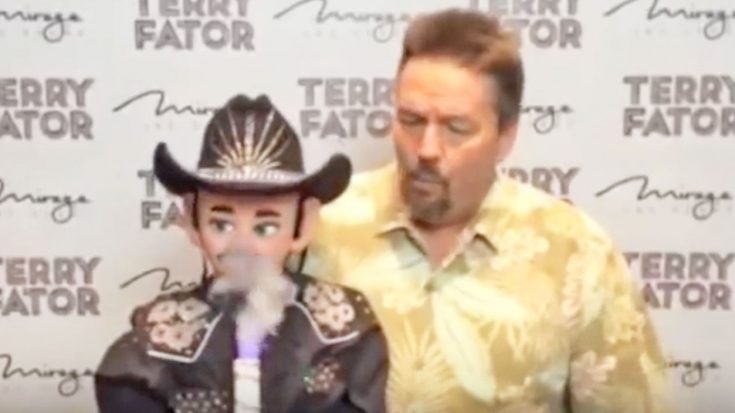 Terry Fator took America’s Got Talent by storm back in 2007 with a series of impressive singing ventriloquism acts, going on to be named the Season 2 champion of the talent competition. The year following winning AGT, Fator signed a five-year and $100 million contract with the Mirage in Las Vegas as the headlining performer.

If you are coming to my show at The Mirage Hotel and Casino, now you can purchase VIP meet and greets and meet me after the show! Purchase here: http://bit.ly/2jyqeuG

His show, Terry Fator & His Cast of Thousands, consists of the ventriloquist doing impressions of some of the most recognizable names in music, including none other than country music legend Willie Nelson.

In a promotional video for his Vegas show, Fator and his puppet Walter T. Airdale teamed up for a high-larious performance of Nelson’s iconic “On the Road Again.”

Fans of Fator cast their votes in to pick the next country superstar to be channeled by redneck Walter, the puppet delighted to hear Nelson was the chosen one as he “taught Willie Nelson everything he knows.” After revealing he is the reason behind the country music legend’s success, the singing cowboy delivered a spot-on rendition of Nelson’s iconic “On the Road Again.”

“And now to make it super Willie Nelson authentic,” said Walter as he pulled a bong out to Fator’s dismay.

“Get that out of here!” said Fator as he waved away a cloud of smoke.

“On the Road Again” was written by Nelson for 1980 film Honeysuckle Rose, the song earning him a Grammy Award for “Best Country Song” and an Oscar nomination for “Best Original Song” at the 53rd Academy Awards.

You can watch the hilarious video below.