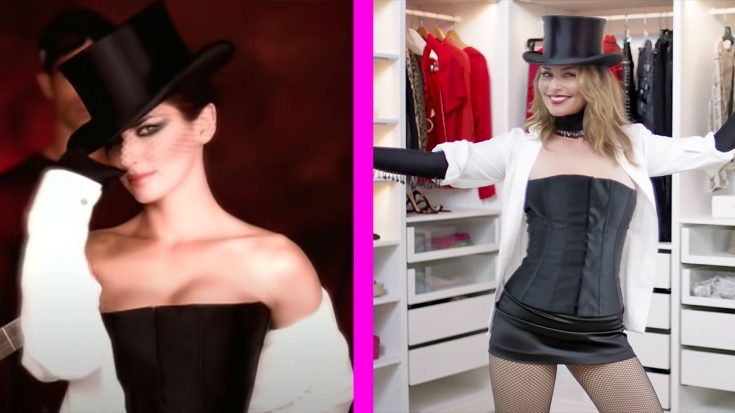 Her 1999 hit, “Man! I Feel Like a Woman!” was her second biggest hit, which sits right below “That Don’t Impress Me Much.”

Aside from being a good song in general, the number also had a sizzling video of Shania performing the song in a tight black dress, with thigh-high velvet boots.

On Thursday, April 15, 2021, the 55-year old country singer brought back the dress in a TikTok video.

The clip featured a snippet of her back in 1999 before it switched to her 15 years later wearing the iconic dress for her 2017 “Life’s About to Get Good” music video. The outfit pretty much is the same although Twain ditched the boots and slipped into some black fishnets instead.

“It’s the actual original outfit, from the top to the bottom,” the Grammy winner revealed during an appearance on The Talk at the time. “We pulled it out of the museum — borrowed it, basically — and I’m thinking, ‘It’s a great idea if I can actually fit into it.’ Honestly, I had to squeeze into it.”

Watch the full interview below.