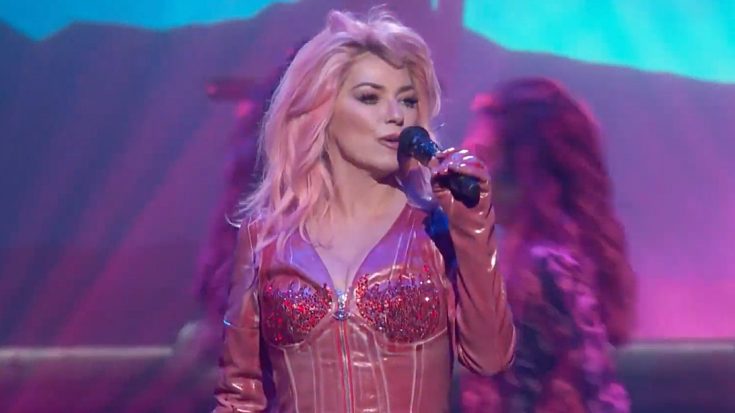 The singer received the Icon Award and proved that she was worthy of the honor as she donned a new hair color and some daring outfits.

Shania Twain showed her love for animal print when walked the red carpet prior to the People’s Choice Awards show. The singer channeled her 1998 music video for “That Don’t Impress Me Much” in a sheer leopard print gown and scarf.

One word for Shania Twain at the #PCAs : iconic pic.twitter.com/9NSq7Ja9WD

During the show, the 57-year-old took the stage to perform a medley of her hits.

The performance came with outfit changes, dancers and plenty of energy. Celebrities from Carrie Underwood, Kelly Clarkson, the Kardashians and Ryan Reynolds were among those seen in the crowd enjoying Twain’s performance.

This Ryan Reynolds shoutout really was something special. #PCAs pic.twitter.com/STQtnI4YQI

Following her jaw-dropping mini-concert, Shania was presented with the Icon Award and addressed the crowd, saying:

“Oh my gosh, this is such a privilege and a dream! Am I dreaming? Thank you so much for presenting me with this award and highlighting my work for having a significant impact,” she said. “I don’t know if that’s the right thing to say, but it’s always my wish to inspire people with my music.”

Shania added that it’s times like this that she misses her mom who died in a car accident in 1987.

“She would have loved watching her little girl living this moment right now. But my fans, my friends, my team…you are the ones, who really fill that space…not my mother’s space. But, you’re here with me, you’re celebrating, we’re celebrating together, and you’ve made me feel loved and special my whole working life. I’ll always be grateful for that,” Twain said.

The award comes ahead of the release of Shania Twain’s sixth studio album, “Queen of Me,” and a corresponding tour. The “Queen of Me” album is slated for a February 3, 2023, release. Twain’s tour will kick off in April and take the artist to more than 70 cities around the globe before wrapping in Canada in November.