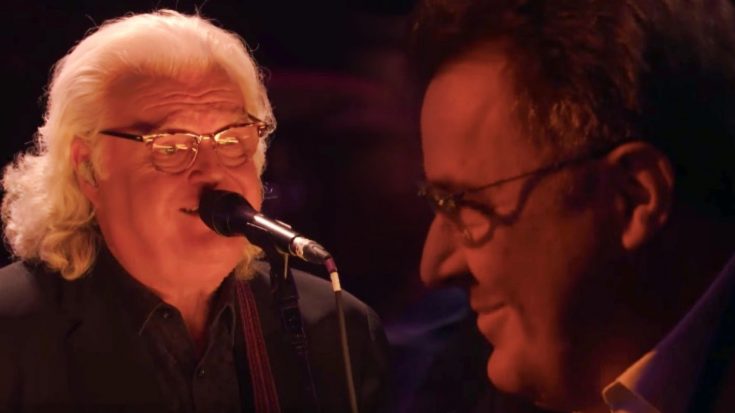 There’s no arguing that Vince Gill is one of the most influential country artists in history. So many people have been inspired by his talents as a singer, songwriter, and musician.

Gill’s contributions to country music were recognized during a CMT Giants special that aired on Friday (September 16). Artists such as Carrie Underwood, Luke Combs, and even the rockstar Sting took to the stage to honor Gill by singing covers of his songs.

It only made sense that Gill’s longtime friend and collaborator Ricky Skaggs was one of the artists on the lineup. Although Gill knew who was singing during the concert, he did not know which songs they were performing.

So you can imagine how surprised Gill was when Skaggs kicked off his rendition of “One More Last Chance.”

“One More Last Chance” was released in 1993. It reached the #1 spot on the Hot Country Songs chart and ranked as the fifth best country song for the entire year of 1993.

Skaggs took “One More Last Chance” and gave it his personal twist. He opted to perform the song in his typical bluegrass style. In doing so, he delivered a unique rendition of the song unlike any other we’ve heard before.

Gill was a huge fan of Skaggs’ rendition. When he took to the stage later that night, he specifically mentioned Skaggs’ performance as one he loved.

You’re also sure to enjoy Skaggs’ version of “One More Last Chance” when you watch part of his performance below. This surely meant a lot to Gill, since he and Skaggs have been friends for so long.