Remastered Music Video For George Strait’s ‘I Cross My Heart’ 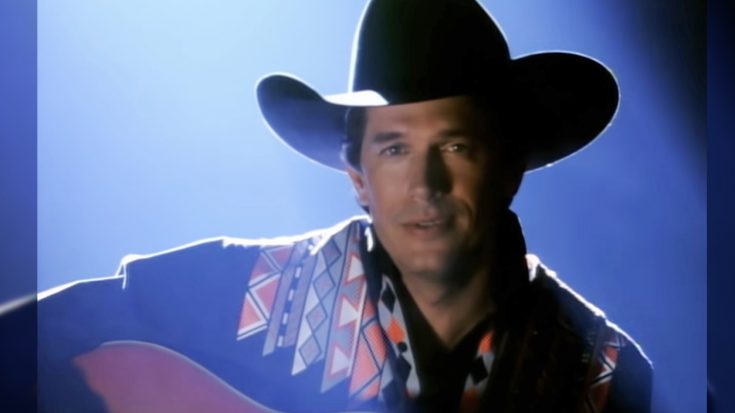 The King of Country tried his hand at acting back in 1992 and 27 years later, we are reminded that it produced some of the best music of his 40+ year career.

George Strait played country singer Dusty Wyatt Chandler in the Warner Bros. film Pure Country. His ponytail-clad character got tired of all the pomp and circumstance that his concerts had turned into. There were so many lights and fog that he could barely see his audience, and when he completely stopped singing, no one seemed to notice.

He decided to leave that life behind for a simpler country life, eventually meeting and befriending and beautiful woman named Harley Tucker and her family. They were unaware of his celebrity status, which he really enjoyed. He and Harley grew to love each other and after finding out who he really was, Harley broke up with him.

He returns to performing, under the condition that he can do live shows the way he wants to, and wins Harley back at one of his live shows by singing “I Cross My Heart” to her.

Whether you have seen the movie or not, we are sure you’ve heard the music from it, seeing as the soundtrack is Strait’s most commercially successful album to date, selling over six million copies. The soundtrack included 11 songs that were featured in the movie including “I Cross My Heart,” “Heartland,” and “When Did You Stop Loving Me.”

“I Cross My Heart” has become one of the more popular songs Strait has released in his illustrious career. He released a music video for it in 1992 and all the footage is scenes from Pure Country. Because it was released over 25 years ago, the quality isn’t all that great.

For a few months in 2019, Strait has been taking advantage of “Throwback Thursday” on social media and changing it to “Honky Tonk Throwback” to release remastered versions of his classic hits. On April 25, 2019 he released the remastered music video for “I Cross My Heart.” 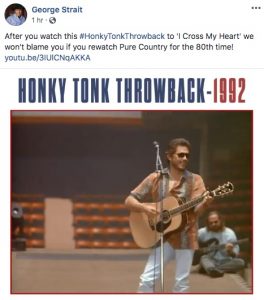 Watch the new remastered video below. You’ll be glad you did!