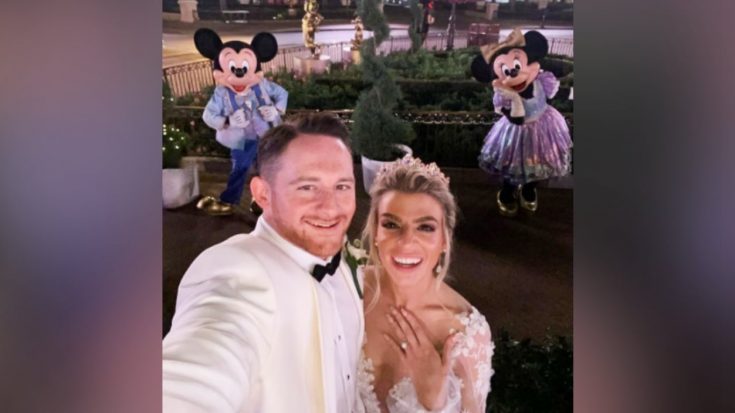 So when it came time for the couple to plan their wedding, they knew they wanted to celebrate that special day in Disney World as well. They were married on Saturday (February 12) during an evening ceremony held in Magic Kingdom.

The flower-lined aisle was placed down the middle of Main Street U.S.A., and the couple said their vows in front of Cinderella castle.

Following the ceremony, the Blackstocks traveled around the park in a carriage modeled after the one in the movie Cinderella. They shared their first dance to Kacey Musgraves‘ “Butterflies.”

Reba, who shares Shelby with her ex-husband Narvel Blackstock, danced with her son to one of her own songs…”You’re Gonna Be (Always Loved by Me).” Later in the evening, she entertained guests by performing “Fancy” at the reception.

In the days since their wedding, Shelby and Marissa have shared several wedding photos and videos taken by their friends and family. They also posted a sneak peek of their official wedding video, which shows them on the grounds of the Grand Floridian Resort & Spa. The couple’s two dogs, Watson and Belle, also appear in the clip.

Marissa posted a stunning image that shows her and Shelby in front of the horse-drawn carriage that transported them around the park.

“Happily Ever After,” Marissa captioned the image along with a sparkle emoji.

The Blackstocks shared additional photos with People. One of the pictures shows the newlyweds with Reba and her boyfriend of two years, actor Rex Linn.

Reba and Rex were all smiles in the photo. They must have been overjoyed!

It's a Tale as Old as Time! Shelby Blackstock and Marissa Branch Say 'I Do' in a Fairytale Disney Wedding https://t.co/79cYvFZHe6

Four days after the wedding, Shelby took to Instagram to reflect on the special day and the week leading up to it.

“Speechless…The most magical day of my life!” Shelby said about his wedding.

He went on to gush about his bride, saying:

“In the end, I married my best friend, my Princess, my Queen; the best way possible!”

Shelby thanked everyone who celebrated with them, and also thanked anyone who sent them congratulatory messages. He ended his post by thanking Reba and Narvel for helping plan the wedding.

“It truly was perfection!” Shelby said.

Look below to read Shelby’s entire post and see all of the wedding photos he shared. We’re so happy for him and Marissa!