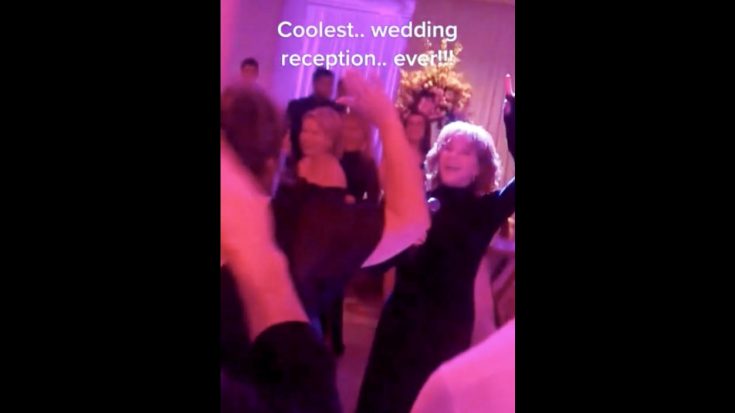 The ceremony was held in the evening in front of Cinderella Castle. Pink and white flowers lined the aisle, which was down the middle of Main Street.

Shelby and Reba shared their mother-son dance to Reba’s 2005 song “You’re Gonna Be (Always Loved By Me).” One guest filmed the pair’s dance, and Shelby shared the video on his Instagram Story.

Since Instagram Stories are only up for 24 hours, that video has since disappeared. But we were able to capture some images from the video, which you can see below.

The couple moved to Epcot for their reception. Marissa told People that the park holds a lot of sentimental value for her and Shelby, so it made perfect sense for them to celebrate their marriage there:

“Epcot was also the first place Shelby said ‘I love you’ and where he would later propose. Some of our happiest times together have happened at Epcot, so celebrating our nuptials there just made sense!” Marissa said.

During the reception, Reba hit the dance floor and entertained the guests with a performance. She sang her iconic hit, “Fancy,” much to the delight of those in attendance.

One of the guests, Zach McCabe, posted a short video of Reba’s performance on TikTiok. The clip shows Reba singing her heart out to “Fancy” while everyone around her chimed in.

Look below to watch the video of Reba singing “Fancy” during her son’s wedding reception. That must have been a fun party!