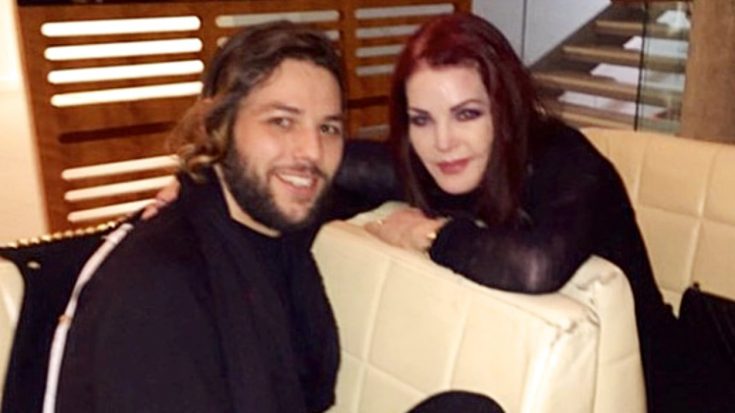 Elvis and Priscilla Presley only had one child together, daughter Lisa Marie Presley. Lisa Marie went on to have four children of her own, Riley Keough, Benjamin Keough (who sadly passed away in 2020), and twins Harper and Finley Lockwood.

But few people know that Priscilla has another child. She gave birth to a son, Navarone Garibaldi, on March 1, 1987. His father is Marco Garibaldi, who Priscilla dated for over twenty years.

Navarone is a musician and the frontman of a synth rock band. He plays guitar and contributes lead vocals to the group.

Priscilla occasionally shares photos of Navarone on her various social media pages. On Tuesday (February 15) she had some extra special photos to share of her son…because he just got married!

According to People, Navarone married Elisa Achilli at the Schloss Hünigen hotel in Konolfingen, Switzerland. The couple had been engaged for over a year prior to saying “I do.”

I never thought I would find a counterpart that is so understanding and supportive,” Navarone told People. “She makes everything we do effortless, and I can’t imagine life without her.”

Elisa had equally loving things to say about her new husband, telling People, “Navarone is truly the most genuine, sweet and sensitive man I have ever known and I’m so lucky that after four years of long-distance, we can start our life together as husband and wife.”

The couple’s wedding ceremony was held outdoors. People reports that guests tossed colorful flower petals into the air to celebrate after Navarone and Elisa tied the knot.

Proud mama Priscilla gushed about the ceremony on social media. Alongside two photos from Navarone’s nuptials, she wrote:

“Navarone and Elisa are MARRIED!!! The wedding was at the beautiful Schloss Hunigen Hotel in Switzerland. I couldn’t be happier!”

Priscilla later commented on the post to thank everyone for congratulating her son and new daughter-in-law. “I am overwhelmed by your support and love for Navarone and Elisa’s marriage. It means so much to us,” she said.

You can see Priscilla’s post containing the photos from Navarone’s wedding below.

Congratulations to Navarone and Elisa! May they enjoy many happy years together.