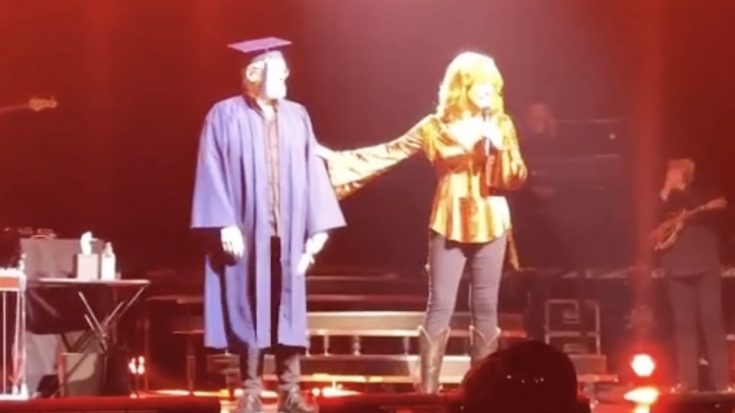 Back in November, Reba McEntire was forced to go on vocal rest. She made the “difficult decision” to postpone three shows. She announced the news on all her social media accounts on November 2, 2022.

She also added a show on December 10th in Estero, Florida with special guest Suzy Bogguss, who replaced Terri Clark for that date.

After finishing up a song, Reba said to the audience, “Okay. We’re going to interrupt our regularly scheduled program right now. As y’all know, we were supposed to be here a month ago, not to come here tonight. And also tonight, in Cleveland, Tennessee, they are having a graduation ceremony at the Lee University, where my drummer, Garth Justice, was supposed to be there tonight, graduating with a degree in business management. Fortunately, he decided to join us in playing the show, so we brought the graduation to him.”

As she said this, Garth’s very own son, Trey, put a cap and gown on his dad and guided him to center stage with Reba. She then handed him a diploma while “Pomp and Circumstance” played throughout Hertz Arena. She held out her hand for a congratulatory handshake and he went in for a big hug!

Reba got emotional while telling the crowd of Garth’s accomplishment while playing in her band full time.

She then decided to dedicate a song to Garth:

“This next song is very appropriate for what we’ve just gotten through here right now. I’ve sung this song many times. I’ve had people stand up in the audience and show their college or high school diploma. Because after their kids were raised and grown out of the house and finished college themselves, they went back and got their degree and fulfilled their dream, so tonight we’re going to do this song for you, Garth. We applaud you.”

Watch her celebrate Garth in the video below.