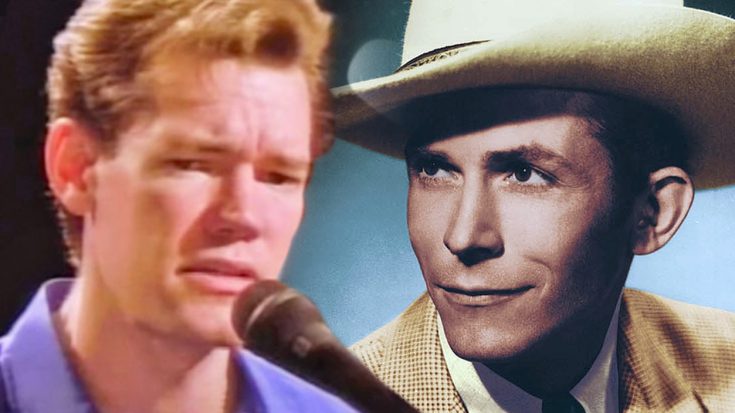 Before he was a country legend, Randy Travis was a humble singer trying to make it big. After playing nightclubs for seven years in North Carolina, he and his manager moved to Nashville, Tennessee, where he was rejected by every major record label in town, some even calling him “too country.”

After independently releasing a live album, he was eventually signed by Warner Brothers Records, who helped catapult his career into superstardom with his debut single “On the Other Hand” and follow up “1982.” Because of the success of his first two singles, he was invited to make his Grand Ole Opry Debut on March 7, 1986, three months before his very first album, Storms of Life, was released.

Little Jimmy Dickens introduced the young singer, who had to be extremely nervous. Singing the heartbreaking Hank Williams song “I’m So Lonesome I Could Cry,” Travis showed off his ability to channel the right emotions necessary to sing this heart-wrenching song.

Travis was raised on Hank Williams’ music, so what better way to kick off his Grand Ole Opry debut than to pay tribute to the man responsible for helping him find his voice?! His performance was incredible, with some fans calling his rendition “the best version of this Hank Williams song that I’ve ever heard.”

He clearly made a lasting impression on fans and Opry members alike, seeing as he became an official member of the Grand Ole Opry just nine months after his debut, which has to be some sort of record!

“Every time you walk on the Opry stage is a special feeling that I wish I knew how to describe. There is just a wonderful energy on that stage,” he said. I am very proud to be a member of the Opry.”

Being a member of the Opry means so much to Travis, who was on hand to celebrate his 25th Anniversary of membership in 2011.

Talk about a surprise! We love when Opry member Randy Travis comes by!

“It’s amazing to me to be celebrating my 25th anniversary in the music business on this stage because of the way I grew up and what I grew up listening to,” he said during the celebration, according to The Boot.

Although the below performance isn’t his Opry debut, Travis singing “I’m So Lonesome I Could Cry” is a sight to see. Enjoy it below.