Garth Brooks’ “Much Too Young” Was Intended For George Strait 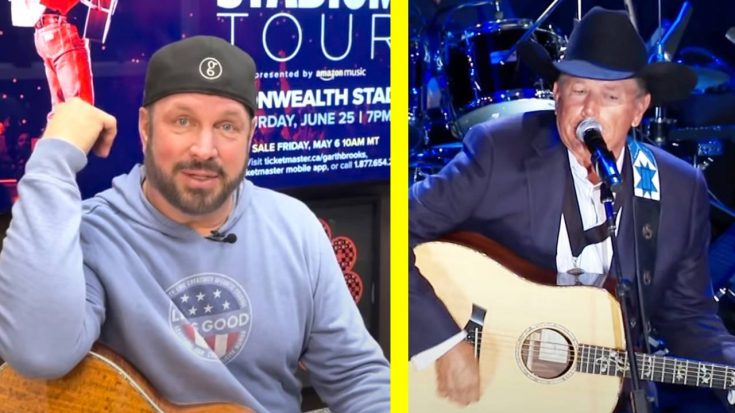 In 2017, Garth Brooks released a book – with his music in it – called Garth Brooks: The Anthology Part 1. It detailed the first five albums he released.

In it, Brooks says he wanted to be George Strait for years before he ever signed a recording contract. If he had his way, The King of Country would have recorded  “Friends In Low Places” instead of him.

On page 82 of Anthology, Brooks said Strait had an opportunity to record the hit song, but passed. Brooks even sang a pretty good imitation of Strait he admitted, especially during the demo for “Friends In Low Places.”

As we all know, Strait did not record ‘Friends In Low Places,” but that wasn’t the only song Brooks had written with The King in mind.

Turns out, when Brooks moved to Nashville in 1987, his main goal was to get George Strait to record a song he wrote called “Much Too Young (To Feel This Damn Old).” He didn’t record this song either and it became Brooks’ very first single and the beginning of his legendary career.

At Country Radio Seminar in February 2020, Brooks revealed this fact to the crowd, but it’s actually not the first time it’s been publicly said that “Much Too Young (To Feel This Damn Old)” was intended for Strait.

“I moved to this town to hear George Strait sing ‘Much Too Young (To Feel This Damn Old).’ So, long story short, I was lucky enough to get into the Hall of Fame,” he said telling a story about when he was inducted in to the Country Music Hall of Fame in 2012. Strait was there to honor him, but Brooks didn’t know what he would be performing.

Someone on stage introducing Strait told the crowd the story of Brooks wanting Strait to sing that song. His dream finally came true because Strait was welcomed to the stage and announced that he would be performing “Much Too Young (To Feel This Damn Old).”

After hearing that introduction, Strait told Brooks, who was sitting in the audience, “You just didn’t try hard enough. I need songs like this.”

Strait sang the lyrics Brooks wrote 25 years earlier for him, which brought the “Friends In Low Places” singer to tears. Watch a clip of the Hall of Fame performance below.