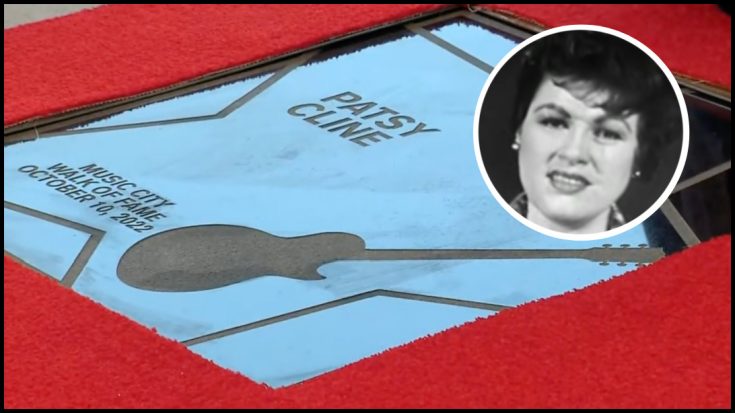 Nearly 60 years after her death, Patsy Cline received one of the biggest honors Nashville has to offer…a star on the Music City Walk of Fame.

Patsy Cline was arguably one of the most influential female country artists in history. During the course of her brief 8-year professional career, Cline became the first country artist to have a pop crossover hit with her song “Walkin’ After Midnight.”

Shortly after joining the Grand Ole Opry and achieving her first Billboard country chart No. 1 with “I Fall to Pieces” in 1961, Patsy suffered serious injuries in a car accident. The head-on collision threw Cline into the windshield, leaving her with a broken wrist, dislocated hip and a “jagged cut across her forehead that required stitches.

After a month-long hospitalization, Cline insisted on returning to the stage. “Crazy,” a Willie Nelson-penned tune, became singer’s first single release following her return to the stage, would become her biggest pop hit and most recognizable song.

Two years later, Patsy Cline, Cowboy Copas, Hawkshaw Hawkins and pilot, Randy Hughes, were killed when they plane they were traveling in crashed 90 miles outside of Nashville.

Since her death, Patsy Cline has been the recipient of numerous honors, but there was one she hadn’t received…until now.

Trisha Yearwood joined Cline’s daughter, Julie, to unveil the star on Monday (October 10). Yearwood shared the news, and a photo of her alongside Julie, with a caption that read, “Today I had the privilege of inducting Patsy Cline into the [Music City Walk of Fame]. It was honor to share this moment with her daughter, Julie, and celebrate one of the most influential vocalists in country music and beyond. Life is crazy…❤️,” Yearwood wrote in her caption. She added: “Look closely and you’ll see one of my most treasured gifts from the Cline family…a necklace that Patsy wore!”

This wasn’t the first time Trisha Yearwood wore the necklace. During the celebration of her 20th year as an Opry member, Yearwood donned the jewelry and shared the story behind her ownership of it.

“20 years ago, Julie and Charlie Dick came out and gave me a plaque that had a necklace that had belonged to Patsy Cline, and gave it to me that night. There’s a letter from Julie about that…” Trisha said.

A close-up of the letter shows that it is a note of congratulations from Patsy Cline’s family along with confirmation that the piece is an authentic item from Cline’s personal costume jewelry collection.

“I am honored to know that you will be receiving a special momento. I am sure it will be in good hands,” the letter reads. “I know that my father has verified this piece as being authentic. It is a piece from my mother’s collection of costume jewelry.”