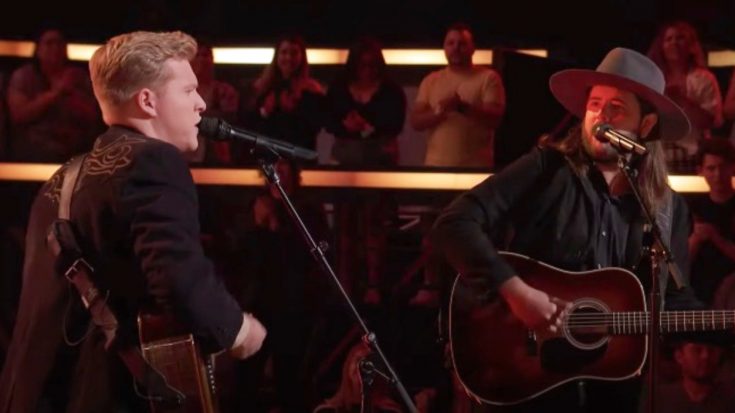 Blake Shelton and his team advisor Jimmie Allen coached the first team to perform in the battles for Season 22 of The Voice. Austin Montgomery faced off against Tanner Fussell in a performance of Johnny Cash‘s “Folsom Prison Blues.”

The live recording of “Folsom Prison Blues” led Cash to the first Grammy win of his career. He won the award for Best Country Vocal Performance, Male.

Montomgery and Fussell brought their A-game to their cover of “Folsom Prison Blues” on The Voice. It was clear from the get-go that Shelton was going to have a hard time picking a winner.

“That was like an awards show performance!” commented new coach Camila Cabello.

Gwen Stefani said, “I was absolutely blown away by that performance.”

Shelton was also amazed by his team members’ battle. He said:

“You know, this pairing to me, I thought, ‘well this is gonna be weird because they’re so different.’ Tanner has a tendency to go into the growl, where Austin keeps his tone a little cleaner…this is one of those that’s just tough guys.”

Just as Shelton was going to name the winner, The Voice ended with a screen that read “to be continued tomorrow night.” They left things off on a cliffhanger!

So we have to wait until tonight’s (October 11) show to see who Shelton chose as the winner of the battle. Until then, head below to watch Montgomery and Fussell sing “Folsom Prison Blues.” Who do you think should win?