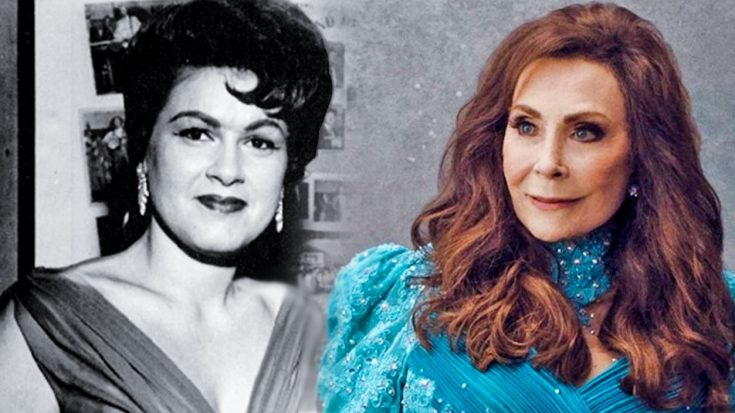 In 1976, Loretta Lynn released her first memoir. Titled Coal Miner’s Daughter, the book told her life story, covering everything from her childhood, her relationship with her husband Oliver “Doolittle” Lynn, and her rise to country music stardom.

Lynn also used the book to illustrate the role a dear friend played in her life. That friend was Patsy Cline, who took Lynn under her wing when she was first getting her start.

The two singers became extremely close, and remained friends until Cline was killed in a plane crash in 1963.

In 1980, a movie was released that was inspired by Lynn’s memoir. Also titled Coal Miner’s Daughter, the film tossed an even brighter spotlight on Lynn and Cline’s friendship.

Now, decades after the two country icons befriended each other, their relationship remains a source of intrigue. In 2019, a new film entirely devoted to the pair’s friendship debuted. Titled Patsy & Loretta, the film starred Megan Hilty and Jessie Mueller, and was co-produced by Lynn’s daughter, Patsy Lynn Russell, and Cline’s daughter, Julie Fudge.

The film was well-received, sparking even greater interest in the friendship Lynn and Cline shared.

I hope y’all liked the Patsy & Loretta movie on Lifetime last night. On one hand, it was so hard to watch, yet in another way it made me happy. I thought those girls did a great job, but it sure makes me miss my friend Patsy something terrible. I was lucky to have had a friend like Patsy Cline and I’ll always be thankful for that!

Riding on the heels of Patsy & Loretta’s success, Lynn has decided to release her second-ever memoir. Rather than reiterate her life story, this new book will focus on the historic friendship between her and the “I Fall to Pieces” singer.

Southern Living reports that Lynn’s new memoir will be titled Me & Patsy Kickin’ Up Dust. The book’s official description is as follows:

“Full of laughter and tears, this eye-opening, heartwarming memoir paints a picture of two stubborn, spirited country gals who’d be damned if they’d let men or convention tell them how to be. Set in the heady streets of the 1960s South, this nostalgia ride shows how Nashville blossomed into the city of music it is today. Tender and fierce, Me & Patsy Kickin’ Up Dust is an up-close-and-personal portrait of a friendship that defined a generation and changed country music indelibly—and a meditation on love, loss and legacy.”

We know what you’re wondering…when can you pick up a copy of the book? Thankfully, it will be here in just a few months.

Southern Living reports that Lynn’s new memoir will be released on April 7. The book is already available for pre-order on Amazon.

April may not be that far away, but we’ll still be anxiously counting down the days until we can read Me & Patsy Kickin’ Up Dust!