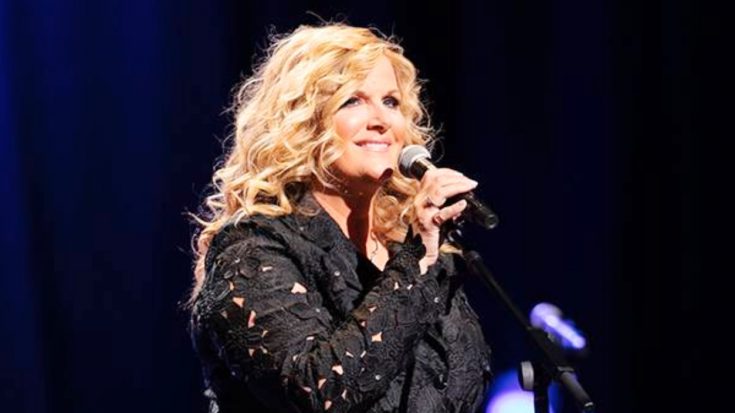 On March 13, 1999 Trisha Yearwood was officially welcomed into the Grand Ole Opry by the legendary Porter Wagoner.

But before she was inducted, she had to be invited by an Opry member, and that person was Ricky Skaggs.

The moment that started it all — Ricky Skaggs inviting Trisha Yearwood to become a member of the Grand Ole Opry. ✨

Everything came full circle on March 12, 2019, when Yearwood was celebrating her 20th anniversary of being a Grand Ole Opry member. Along with a number of artists that joined her celebration, Skaggs returned to the Opry stage with Yearwood to perform the Alison Krauss song “Two Highways.”

Yearwood also performed Patsy Cline’s “Sweet Dreams,” her hit “Wrong Side Of Memphis,” a duet with her husband Garth Brooks to “Whiskey to Wine,” and of course “She’s In Love With The Boy,” which is the song Wagoner always requested she sing at the Opry because it was the song that started it all.

Something You Probably Didn’t Notice

Yearwood was dressed in a beautiful black blouse, wearing minimal yet significant jewelry.

The jewelry she wore was a unique silver necklace that she’s had for 20 years, but Yearwood isn’t the original owner – Patsy Cline was.

In an interview before the celebration, she explained, “So 20 years ago, Patsy’s daughter Julie and [Patsy’s widower] Charlie Dick came out and gave me a plaque that had a necklace that had belonged to Patsy Cline…so I brought it tonight. It’s framed, but I’m going to break it out of the glass and wear it. She was probably one of the first female artists that I ever remember hearing.”

You can see the necklace clearly in the photo below.

While there aren’t many photos of Cline wearing jewelry, we do believe she is wearing the necklace gifted to Yearwood the photo below!

Gerald Cline and Patsy Circa 1954

Watch Yearwood talk about the necklace in the video below.