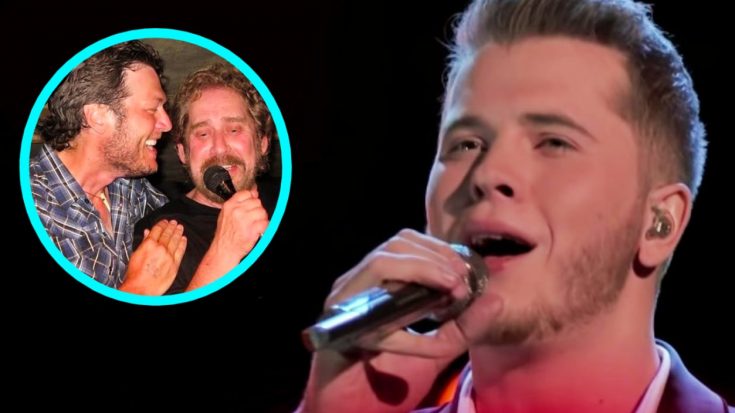 Country music lost one of its greatest voices on April 10, 2019. That’s the day that Earl Thomas Conley passed away, leaving many of his fellow artists heartbroken.

One person who was deeply saddened by the country icon’s passing was Blake Shelton. The two had been friends for years, and shared a special bond that Shelton always treasured.

In an emotional post made on social media, Shelton wrote that Conley was his “all time favorite singer, hero, and [his] friend.”

So you can bet that the emotions were at an all-time high when Shelton’s Voice team member Gyth Rigdon performed one of Conley’s biggest hits during the first night of the Season 16 finale.

The song Rigdon took on was “Once in a Blue Moon,” which Conley released in 1986. The track became Conley’s 11th career chart-topper in the U.S., and it also topped the country chart in Canada.

This Song Was In Gyth’s Wheelhouse

With a naturally soft and tender feeling, the song was the perfect fit for Rigdon’s voice.

Through the weeks, the Voice finalist proved that his voice truly shines whenever he gets the chance to sing something emotional. Such songs bring out the unique, folksy tone of his voice.

He’s also a master at knowing when to play with that tone and his volume as he sings in order to generate strong emotions at certain points in his performance. So when it was revealed that Rigdon was going to be singing Conley’s “Once in a Blue Moon,” no one questioned if he’d be able to pull it off.

The performance ended up being more subdued than others we’ve seen from Rigdon in the past, but it worked. There’s something special about listening to a singer showcase the power of their voice without belting out a bunch of notes, and that “something special” was definitely present in Rigdon’s performance.

What Did Blake Think?

It seems that viewers at home agreed about the quality of Rigdon’s performance, as many took to Twitter to praise him for a job well done.

#thevoice @GythRigdon stole the show with once in a blue moon!!! Good job in representing ETC….#stolemyheart ❤❤❤

Tonight on the Voice Finale, Gyth Rigdon of team Blake paid tribute to Earl Thomas Conley by singing “Once In A Blue Moon” and did a FANTASTIC job…I only Hope Millions heard this Tribute to one of Country Musics Greatest singers and songwriters…

Gyth Rigdon deserves to be the next Voice winner he did an amazing job singing Once In A Blue Moon he showed honor to a hometown legend I cried through his whole performance pic.twitter.com/I3tlqLfPDG

As for Shelton, he was pleased with how well his team member performed his hero’s song. He gave Rigdon the highest praise of all, saying he felt Conley would have been “honored” to hear him sing.

Knowing how much respect Shelton had for Conley, we don’t take those words lightly, and you shouldn’t either. So in case you missed it, be sure to listen to the audio clip of Rigdon singing “Once in a Blue Moon” below.

We’re sure that what Shelton said was true…Conley must have been smiling down on Rigdon that night.