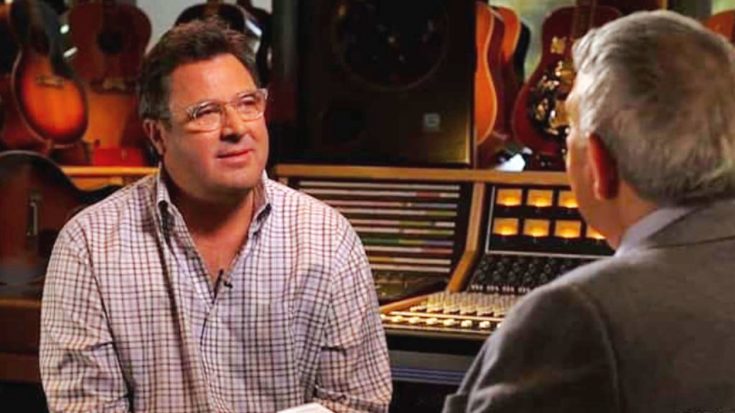 For decades, country music legend Vince Gill has been providing fans with Grammy-award winning songs and chart-topping albums. While he has become a staple of country music, it is no question that the genre is quickly changing since his time in the main spotlight. Now, Gill is opening up about how he feels toward the world of modern country music.

Check out Vince on the cover of American Songwriter Magazine

Gill sat down with journalist, Dan Rather to talk all things music and his decades-long career. During their interview Rather wasted no time by asking the singer,

“Do you like the way country music is going today?”

Gill had a prompt response that will prove just how respectful, honorable, and humble he truly is.

Gill began by explaining that, he does in fact like it, it’s just “not my cup of tea.” He explains this further,

Did y'all know that Vince has won 18 #CMAawards?!

The icon further described that he doesn’t want to look back and have the impression that he’s better – after all he’s already left an incredible and unforgettable mark on the genre for decades to come.

Gill highlights the fact that not everyone has to follow the same path.

“There’s not a rule book that says you have to like this, or it doesn’t count or you’re not as good. I’m not gonna be that guy. There’s a lot of it I’m not crazy about but it’s not personal. They don’t have anybody cheering for them harder than I do.”

#repost DAN RATHER: "Do you like the way country music is going today?" VINCE GILL: "I do. It's not my cup of tea,…

A truly amazing response to a frequently pressed question for classic country stars.

You can listen to Vince Gill’s newest song, “A Letter To My Mama” below.