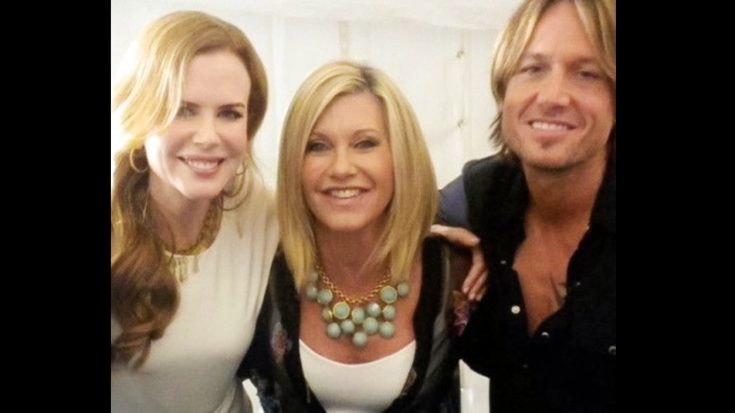 Keith Urban, Nicole Kidman, and Olivia Newton-John all grew up in Australia. That shared connection helped them all form solid bonds when their lives crossed paths.

Newton-John, who was known for her successful music career and role in Grease, was always someone Urban looked up to. They became friends in the early 2000s, and wrote a song together called “Sunburned Country.” They recorded the track as a duet, and it appeared on Newton-John’s 2008 album A Celebration in Song.

Beyond being a friend and collaborator, Newton-John was also present on the day that Urban met his future wife.

“I was then going to be honored at this event in Los Angeles, which turned out to be an event that my future wife was going to be honored at, as well,” Urban explained in an interview with Taste of Country. The event he referenced was the G’Day LA gala, which was held in January 2005. Newton-John was there too, and she conducted Urban’s introduction at the event.

Urban met Kidman for the first time that day. Sparks flew right away, and they were married on June 25, 2006.

Remembering how Newton-John played a role in their love story, Urban said, “She was there the night I met my wife. That has a lot of importance to both of us.”

When Newton-John passed away on Monday (August 8), Urban and Kidman released a joint statement to express their sorrows. They said:

“Livvie brought the most divine light into the world… so much love, joy, inspiration and kindness… and we will always be hopelessly devoted to you.“

You can watch Urban and Kidman sing with Newton-John and other famous Australians by tuning in to the video below.

It’s obvious how much Newton-John meant to both Urban and Kidman. She will be missed…