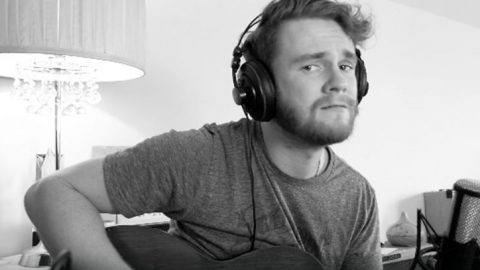 Son of country music legend Merle Haggard, the one and only Ben Haggard shared a bit of his heavenly gift by gracing fans with a breathtaking performance of the popular hymn “Amazing Grace”. Maintaining a simple, yet chilling, approach to his stellar rendition, the singer had viewers on the brink of tears and edge of their seats. Shooting his performance in a subtle black and white filter, he elicited a somber experience from viewers captivated by the young man’s searing talent.

Ben’s voice was a striking comparison to his father’s, echoing the same unforgettable talent that gifted country music with timeless classics. Diving straight into his performance, the singer wasted no time showcasing his impeccable vocals and musical elegance. “Amazing Grace, how sweet the sound,/ That saved a wretch like me./ I once was lost but now I’m found./ Was blind, but now I see,” he sang.

The singer’s change in pace resonated with viewers, clinging to Ben’s outlaw sound and raw emotion that pierced the hearts of fans. As he continued into his performance, praise poured in with uplifting comments both dedicated to the singer and his influential father. Finding the staunch similarities in their voices, fans glorified Ben for continuing to keep his father’s spirit and chilling talent alive and well through his work.

The hymn, published in 1779  by John Newton, has remained a popular cover, drafting the remarkable tune from personal experiences. The song, explaining religious conviction, has remained a classic favorite by fans, finding serenity in its powerful lyrics.

Be sure to check out Ben’s phenomenal performance below.