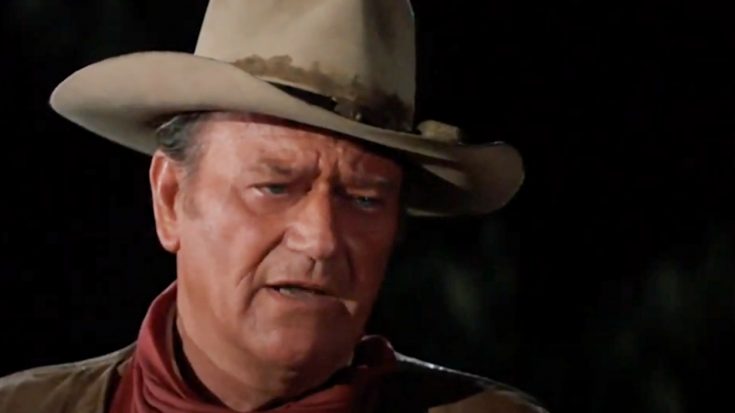 While John Wayne is mainly known for his commanding presence onscreen, fans also know him for his interesting love life. Wayne married three times — first to Josephine Alicia Saenz, then to Esperanza Baur, and lastly to Pilar Pallete.

When she first met Wayne, Saenz was just 15 or 16 years old. Wayne was in college at the time and was still working to make a name for himself in Hollywood. The two eventually wed and had four children…but they later divorced in 1945.

In 1946, Wayne married Esperanza Baur – a Mexican actress – who he met in Mexico City on vacation while he was still married to his first wife, Josephine Saenz. The marriage was bittersweet and turbulent. Allegedly, she was jealous of his passion for work and his beloved children.

“Our marriage was like shaking two volatile chemicals in a jar,” Wayne once said.

She suspected an affair between Wayne and his Angel and the Badman co-star Gail Russel – which they both denied. When that film finished shooting, the cast and crew celebrated and Wayne returned home extremely late in the night. Baur was waiting for him, drunk and enraged. Upon his arrival, she tried to gun him down as he crossed the threshold.

A messy divorce ensued less than a decade later. The two had no children. Wayne said Baur was a lush, Baur accused Wayne of domestic violence. Amid the proceedings that dragged on for two years, he accused her of having an affair with hotel heir Nicky Hilton.

In 1954, Wayne got married for the third and final time to Pilar Pallete – another Latina actress. She reconnected with Wayne when she had flown from her home country of Peru to dub a film in English. They had first met him several years before when he was scouting for filming locations in Peru.

The pair got married in Hawaii, and after welcoming three children with Wayne, Pallete decided to quit acting so that she could care for them.  The two informally separated almost 20 years after their nuptials, but never legally got a divorce.

After their 1973 separation where Pallete moved out of the home they shared, he began a romantic relationship with his former secretary Pat Stacy who he was still seeing when he died from stomach cancer.

Pallete was still his legal wife at the time of his death in 1979 and later contributed to various biographical projects about her late husband and his legacy of work.

Just a few short years after his passing, Pat Stacy shot an interview in which she chronicles the years she spent with John Wayne.