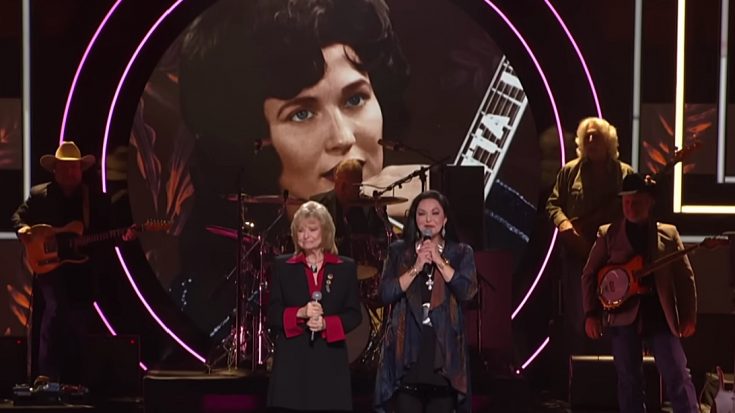 Loretta Lynn died October 4 at the age of 90. Tributes have poured in ever since her death, but perhaps the most moving tribute yet came from her sisters during last week’s CMT Artists of the Year event.

In an annual televised event, CMT honors the hottest acts of the year as well as an artist of a lifetime. This year’s honorees included Carly Pearce, Cody Johnson, Walker Hayes, Luke Combs, Kane Brown and breakout artist Lainey Wilson. Alan Jackson was awarded the Artist of the Year trophy.

“She guided me through this business. I grew up singing her fightin’, drinkin’, cheatin’ songs… she went from being my hero to my great friend,” Tucker said.

Loretta’s sisters, Crystal Gayle and Peggy Sue, then took the stage and were greeted with a standing ovation. Several members of the audience were seen with tears in their eyes as they applauded.

“The world lost a legend. We lost a sister,” Crystal Gayle told the crowd. “As I look out into the audience, I see so many faces that my sister considered friends. And in her words, ‘Love you, honey.'”

The sisters then sang one of Loretta Lynn’s biggest and most recognizable hits, “Coal Miner’s Daughter.”

The song was penned by Loretta and is a biographical account of her upbringing. The song tells the story of Lynn’s childhood as the daughter of a coal-mining father during the Great Depression in Kentucky.

Loretta Lynn was encouraged to record “Coal Miner’s Daughter” by her producer, Owen Bradley. At Bradley’s insistence, Lynn’s song was cut from 10 verses to 6, including a verse about her mother killing a pig during “hog-killing day.” Lynn wasn’t happy that her song had been condensed and once said, “I cried the whole time. And I have lost those verses, I do not remember them. I wish I did.”