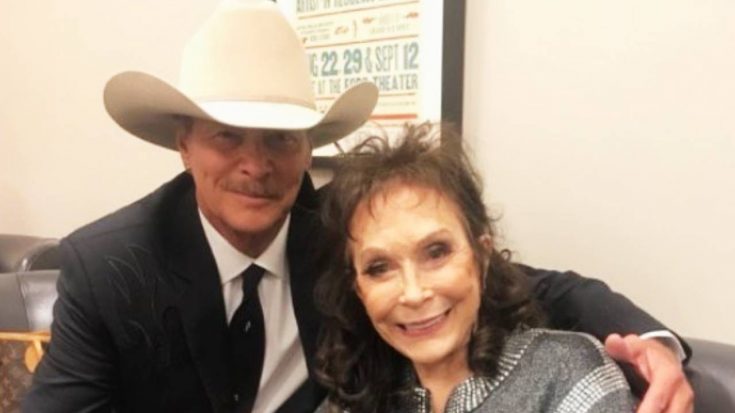 There was no questioning how Loretta Lynn felt about Alan Jackson, and vice versa. They adored each other, and had a friendship that stretched back for decades.

When Jackson was inducted into the Country Music Hall of Fame in 2017, Lynn made the day even more memorable when she surprised him during the ceremony.

Lynn passed away on Tuesday (October 4) at the age of 90. Jackson shared two photos of them together, one of which was taken during his Hall of Fame ceremony.

He wrote a touching tribute next to the photos, saying, “Sweet @lorettalynnofficial, there will never be another Honky Tonk girl like you. I’m gonna miss you. – AJ”

A video shared by Lynn’s hair and makeup artist, Melissa Schleicher, shows just how special Jackson was to Lynn. As Schleicher explained:

“So for years while I was getting Loretta ready she would always ask about @officialalanjackson and talk about how much she loved him. I was getting her ready one day with [her daughter] @patsylynnrussell and I called Alan and asked him to surprise her and of course he did.”

The video shows Lynn’s “priceless” reaction when she received Jackson’s surprise call. She was so happy to hear from him!

“I will cherish this video of two of my longest clients and cherish forever,” Schleicher said. You can watch the video below.

Our hearts and prayers go out to all of Lynn’s loved ones and friends. She is so dearly missed…