Loretta Lynn To Be Honored With Star-Studded Concert Celebration 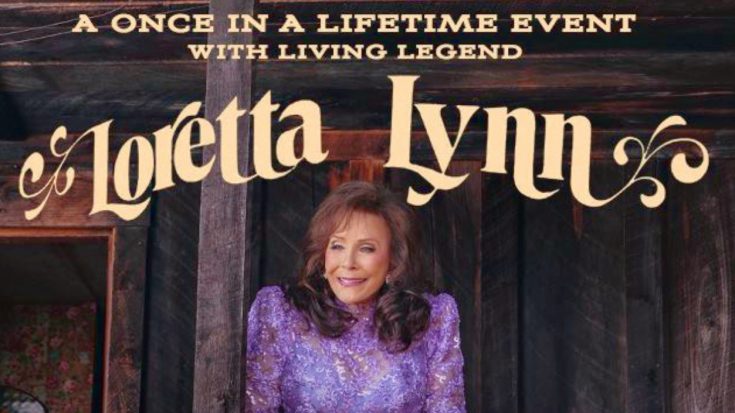 This isn’t an April Fool’s joke!

The legendary Loretta Lynn will be turning 87 years old on April 14th, and to commemorate this joyous occasion, some of her closest friends and biggest admirers are honoring her in a huge way! The biggest and most respected names in country music are joining forces for a once in a lifetime event honoring the Coal Miner’s Daughter that you are not going to want to miss.

Lynn was on hand for the announcement, which was broadcasted live on the Grand Ole Opry’s Facebook page. The country legend was seated on stage to reveal the big news, and later joined by Garth Brooks, who is slated as one of the night’s many performers.

CMT’s Katie Cook hosted the live stream and asked Brooks why he’s so excited about the All-Star Birthday Celebration.

“She’s the queen of country music, there’s not a level she hasn’t crushed, no matter how big this party is, it ain’t gonna be big enough! This is going to be an honor and a blast!” he said.

Several of the performers took to social media after the announcement was made to express just how excited they are for the upcoming event!

We’re honored to be a part of @LorettaLynn's birthday celebration concert April 1st at @BrdgstoneArena in Nashville. This is gonna be such a special night for the Queen of country music. Tickets go on sale January 18th at 10am. https://t.co/lcxgX7x92r pic.twitter.com/wdTcNEfnJs

So excited to celebrate one of the all-time greatest (and one of my personal favorites), Ms.@LorettaLynn!!

Tickets on sale this Friday at 10am CST. pic.twitter.com/FAeh7ZxUOX

I'm so honored to be a part of the legendary @LorettaLynn's birthday celebration on April 1 at @BrdgstoneArena in Nashville. Tickets go on sale Friday at 10AM CT!

If you’d like to grab your tickets early, starting Tuesday at 10AM you can use code: BIRTHDAY pic.twitter.com/6SgRprECgb

Not only did Lynn help make this announcement, she also revealed something pretty surprising – she has never had a birthday party!

“I am so excited to celebrate my 87th birthday with all my friends,” Lynn said. “This is the first time I’ve ever had a birthday party! My birthday wish has come true. The only other wish I have is that Keith Urban jumps out of my birthday cake!”

Urban is on the bill, so this could be a possibility!

Tickets for Loretta Lynn: An All-Star Birthday Celebration Concert will be available starting on Friday, January 18 at 10AM CST. Prices range from $29-$149.50, plus fees, and VIP packages are available. According to a press release, proceeds from ticket sales will benefit the Opry Trust Fund and the Country Music Hall of Fame and Museum.

Watch the full live stream of the announcement below.

You heard it here first! Get ready for An All-Star Birthday Celebration Concert for Loretta Lynn Official on April 1! ?