Loretta Lynn Posts First Video Of Herself Since Recent Hospitalization 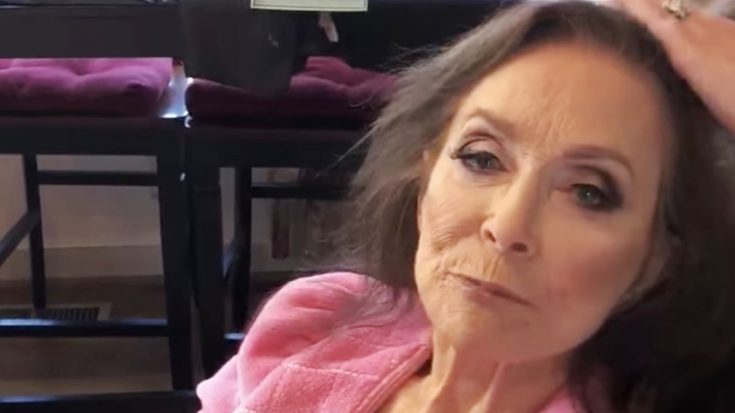 2018’s CMT Artists of the Year celebration made history in that all eight honorees chosen this year were women.

Lynn planned on attending the awards show, but backed out just a few hours before due to illness.

“Leave it to me to go and get sick on the very night all my friends are getting together to honor me at the CMT Award Show as their Artist of a Lifetime. I can’t believe that I’m not gonna be there tonight in person, but I am watching and I’m there in spirit!” she wrote on Facebook.

Loretta Accepts On Behalf of Loretta

The country legend sent her good friend, actress Sissy Spacek, to accept her award on her behalf. You might remember that Spacek played Lynn in the 1980 film Coal Miner’s Daughter.

“I loved playing Loretta in Coal Miner’s Daughter. I just loved being her. I had the band, I had the bus, I had the clothes. But I think we can all agree, there’s only one Loretta Lynn,” she said. “She’s so sorry she couldn’t be here tonight. She’s a little under the weather. I saw her earlier today, and she was so excited about this award.”

“From the moment we met, she’s been my cheerleader, my sister, my best friend,” Spacek said as she fought back tears. “And it’s still like that almost 40 years later. It’s my honor to accept her award. Well done, Loretta. Well done.”

Why Loretta Wasn’t There

Well, as it turns out, the country legend came down with a “really horrible stomach flu,” according to her daughter, Peggy, and just a few days after the CMT event, was already back home and “doing nicely recovering.”

Lynn herself took to social media to reveal she briefly checked into the hospital to take care of her stomach flu, but assured her fans she was already feeling better!

I’ve watched the CMT show more than once now and am so proud of the amazing job all the girls did! I especially…

On Thursday (Oct 25), Lynn’s official Facebook page posted a video of her getting dolled up, which happens to be the first time we’ve seen her since her recent hospitalization…and she looks fantastic!

As she is getting pampered, she looks into the camera and says, “I’m not gonna work myself to death, I’m just gonna work a few days.”

A voice in the background can be heard asking, “What are you gonna sing?”

The video cut off right then, but the caption of the video says she was talking about how much she loves that Willie Nelson classic. With a brand new album out, maybe this means that Lynn is ready to get back out on the road and perform a few shows! That would be incredible.

We are so glad to see that she is feeling much better and is in good spirits!  Watch the short clip below.

Well, they cut me off while I'm talking about how much I love the song, "On the Road Again" and I'm sure looking forward to getting back out there on the road a little. Y'all don't pay no attention to my pink robe, I'm only sharing this to show you how sweet these girls of mine are. Yesterday, they came over and gave me the full spa experience with hair, makeup, and the whole nine yards. We had a lot of fun and a lot of laughs. Every minute with the ones you love is a treasure.